Hot air balloons. They are unique, ubiquitous, cliched and inspiring. Images of them grace coffee cups, posters, boxes for cameras and printer cartridges, among other things. Last year Ben asked if I would be interested in going to a motor home rally at the Albuquerque Balloon Festival. I said what I always say when I’m asked to go anywhere: “Sure!”

There were 80 coaches in our rally group, a tiny portion of the over 3,000 RVs attending the Fiesta. Our parking spot was great, location-wise. We were at the front of the entire parking area facing the launch field.

At 7AM, the mass launch started, and by 9AM the special shaped balloons went up. Simultaneously, chase crews poured out of the launch area to follow their respective balloons. Traffic in and out of the venue was halted until all the balloons had launched and the crews were gone. By 11AM, spectators were gone and the vendors were closed. The whole thing started up again at 5PM. Balloonists set up for evening “Glows.” Balloons were inflated but not launched, and fireworks closed the day.

The place was empty by 9PM, and those of us left behind hunkered down for the night. From our vantage point we got to watch the crews clean up and prepare for the next morning. By 10PM, the whole park was quiet for the night.

I’m not gonna lie, it was tough on our dogs, but not for obvious reasons. We were warned that the the burner noise  and fireworks would be upsetting, but they ignored it all, even when balloons passed over within a few hundred feet. The biggest problem for our dogs was the pavement. It seemed that dogs raised on the road were a little more accepting of various surfaces but Henry and Ryder, being spoiled Midwesterners prefer a nice green lawn for doggie business. In the drought-ridden west, a grassy lawn is a scarce commodity, and anyone who goes to  the trouble of squandering precious water to grow grass takes a dim view of having people, let alone dogs tread on it. In all the weeks we were on the road in Utah, Arizona Colorado and New Mexico only one campground had any large areas of grass. By the time we got to Albuquerque, our dogs were resigned to sand and gravel, but drew the line at asphalt. We managed to find a few grassy areas for them to run around on at the Fiesta, but the grounds were so choked with goat head thorns (aka puncture vine) so I spent a lot of time picking thorns out of dog paws. Everyone had problems with their dogs and the thorns, so at least we had a lot of sympathy. Dog beds, bones and lots of pets were some compensation for living on asphalt. It was a long walk to the nearby dog park, but we did it first thing in the morning and last thing at night. Midday the whole park was empty, so we had the luxury of running all over the museum lawn.

The sight of balloons rising in front of us every morning made up for any hardships. There were 550 hot air balloons present–that’s a bunch! At sunup we’d find ourselves staring down a giant zebra and giraffe, a pink elephant and a cow out the front window. Ben spent the whole morning sitting on top of the RV taking pictures.

The balloon rally in Albuquerque is different in that spectators are allowed to be on the field with the balloons while they are inflating and taking off. I got down there and took lots of pictures. It was exciting, but honestly I wonder how much longer they will allow spectators such access. So many times gawkers nearly throttled themselves by walking into guy lines. It had to make the crews nervous to have people shoving their selfie sticks so close to the three bazillion degree burner flame when they were standing up the balloons.

There was a harrowing incident when a micro burst hit the launch field that had everyone scrambling to save their balloons, and they were literally shoving people and kids out of the way.

Each morning’s launch started with one balloon and increased in number until they started launching in groups of 10 or more. They drifted back and forth over the city, depending on the wind currents. Pilots landed wherever it was best, either backyards, school grounds or occasionally on residential streets. One landed in between the rows of our coaches, which was a big excitement, as we all ran to be impromptu crew members. It’s just something they are used to in Albuquerque. There were so many of them on the ground and in the air at the same time that I marveled at the skill it must take to steer a craft without steering apparatus. I talked to one or two pilots. They are experts at sensing change in the winds, and use altitude to ride the various currents to change direction. I watched pilots  drift back and forth over the launch field and then land their balloons in nearly the same location where they initially took off.  We had two days of beautiful weather, and then things began to deteriorate.

On Saturday afternoon storms roared in with lightning, so flying was cancelled, and thousands of spectators waited in long lines through lashing rain for an armada of school buses to haul them back to the parking lots. It was that moment as I sat in the RV watching them with my glass of wine that I had a serious lapse of character and felt smug about my circumstances.  Sunday was gray and gusty, and launch was delayed an hour until the wind calmed. Even then only a few hardy souls flew. The whole thing was over at noon, and we packed up and drove to an RV park in Santa Fe to rest and clean out. There were about 10 others there who had been at the Festival too, though not in our group. We had fun talking about our experiences, and our circle of acquaintances grew wider.

We’re so conditioned to the idea of conquering and controlling the elements. Balloonists have a more intimate connection with Mother Nature. They accept whatever direction the wind chooses to push them and use their ingenuity to make it work. There were times when they didn’t fly at all, respectful of the power of wind and weather over their fragile craft. A tradition in ballooning that stems from the very early years of human flight is for the pilot to provide wine bread and cheese to property owners upon landing, as a way to celebrate and make amends for trespassing; turning a liability into a welcome nuisance.

That’s wisdom we can all use. Adapt to your circumstances. Be willing to wait to improve your odds of success. Thank anyone willing to welcome you safely home generously. 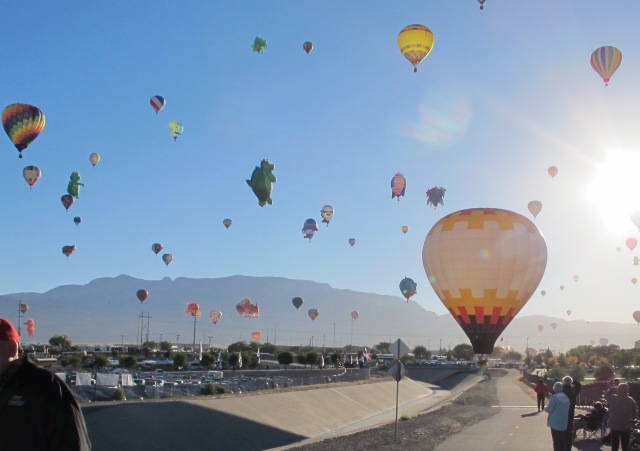 5 thoughts on “Air Borne Over Asphalt”