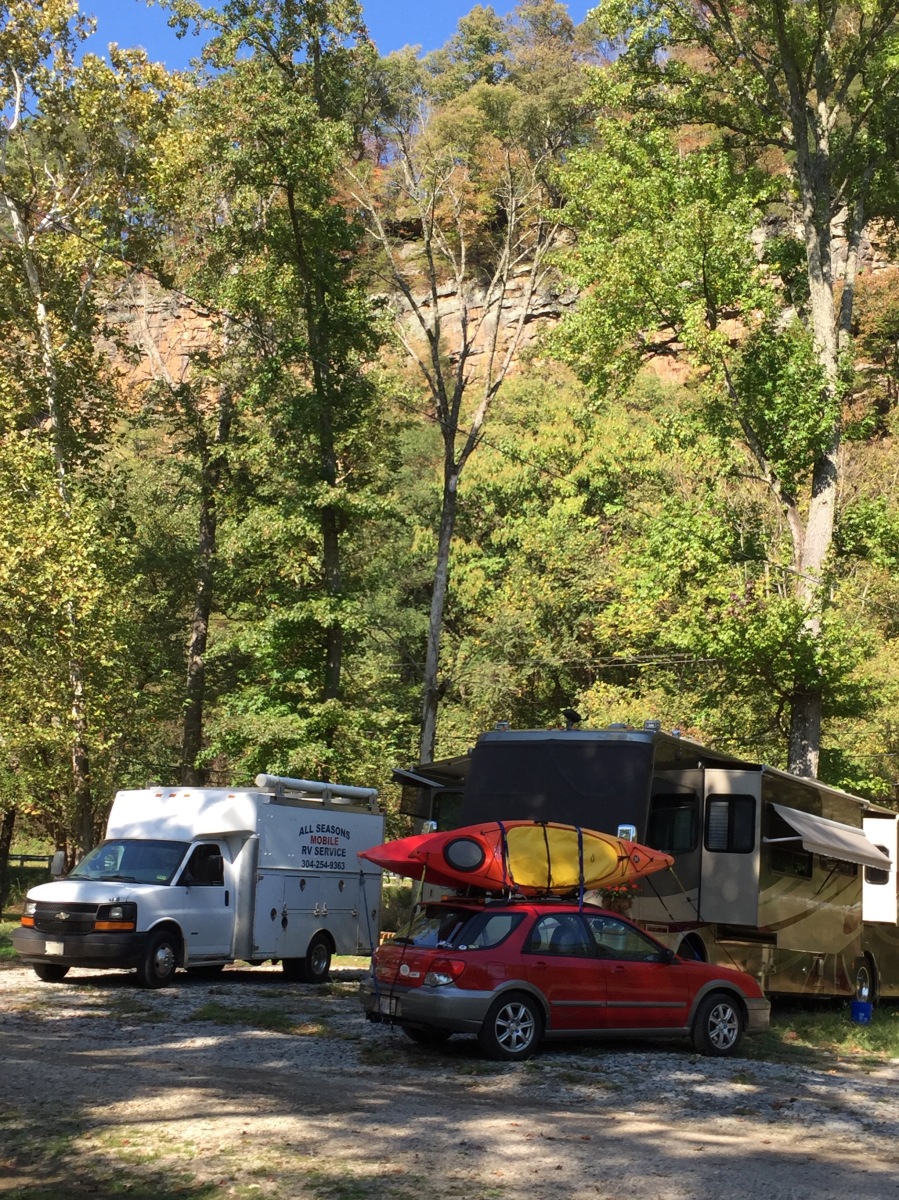 On day two of our West Virginia trip we woke to sparkling blue skies. The campground is right on the river in the midst of mountains. I made coffee and we walked dogs. I had just settled down to read the paper when Ben stalked out of the back with a grim look on his face and mysterious pieces of plastic in his hands. “We have a problem. The toilet is broken,” he said. I made some comment to the effect that it was no big deal, we’d just use the campground bathrooms. “No,” he said. “The toilet is…well, full. Really full. It won’t flush.” Toilet facilities in an RV are nowhere as complicated to operate as something like the Space Shuttle toilet, but they are different than residential toilets. They are manually operated with a foot pedal. The valve action that releases the contents is similar to what you see in an airplane–if you’re inclined to look before you flush. The flushing mechanism on our toilet had shattered making it impossible to release the valve to clear the bowl. The first step in any repair option is to empty the toilet bowl. Dear readers, I will spare you the details. Let’s just say we can add one more unexpected first to our bucket list. That being done, we then learned that there is no way to release the valve other than with the mechanism. Calls to friends confirmed that there is no workaround. New parts must be found and installed. With other breakdowns it was a matter of a quick internet search. When you’re in an area where cell phones are roaming, data connections can be hard to come by.

The New River Campround advertises that is has WiFi. It does indeed, and occasionally that WiFi is also connected to the internet. The intermittent signal meant that every few minutes the network would disappear. This made searching for RV businesses frustrating. Ben wandered down to the office to make inquiries. I hit on a place in Fayetteville, and another in Beckley. Both were about 45 minutes south of our location. We called both places, left messages and got in the car on our parts retrieval mission. While we were in the car, we got a return call from Kenny, whose business was to travel to your campsite to fix your ailing rig. We were still traumatized by the clean up and agreed to have hm come. SInce we were already on the way to Fayetteville, we decided to check out the RV store.

We arrived at the All American Campers store in Bradley, where we met the owner, Greg. We got the needed parts for the toilet in about three minutes, and Ben hung around for an additional 20 minutes just to chat. Greg told us that he was at the point in life where his time was more precious to him than anything else. “Everything in this business is paid for, from the building to the inventory,” he said. “I have been at this for 40 years and I am not about to expand at this point and add headaches to my life.” He and his brother take turns running the store so that one of them can spend a couple weeks in Myrtle Beach each month. He is modest; not a big spender as he wants to be able to help his grandchildren if they need it. He did admit to having some red wine now and then for ‘the heart thing.’ I’m sure we would have stayed longer if the phone had not rung. It was Kenny the repair guy letting us know he was on the way from Beckley. We said our goodbyes to Greg and hit the road.

When we arrived, Kenny from All Seasons Mobile RV Servce was parked next to us, waiting. He looked to be in his 40s, had a very long beard and a wry sense of humor. He hopped right up in the RV without giving the dogs a second thought, headed straight for the trouble. I decided it would be an excellent time to relax outside with the dogs and read my book. There were some mysterious clunks and bangs intermingled with their voices. At one point I heard Ben say something about the perils of making home plumbing repairs with less than adequate skills, and Kenny replied “Yep, it kind of gets you in the manhood department.” Ben was really impressed with Kenny’s expertise. There is not a lot of room in an RV bathroom. Rather than take apart the toilet, he propped a mirror behind it and used the reflection to make repairs. Try threading a needle using the reflection in a mirror, it’s not easy. He was done in no time flat, and we were back in business. Ours was the last call of the day so we spent a few minutes chatting. Kenny travels in a 100-mile radius, making repairs. Our stop was his 4th in the day. As our repair went, it was pretty simple. A broken toilet isn’t a safety issue or something that will keep you from going down the road. He’s dealt with all kinds of problems and all kinds of people. He said he tries to stay within his 100-mile range, but frequently goes outside of that because people “are in trouble.”

It takes a lot of work and a lot of faith to build and maintain a business in a place like West Virginia. Greg is an old-school businessman, devout and up front about his belief. On the back of his business card is this stamp: “If we meet and you forget me you have lost nothing: but if you meet Jesus Chrst and forget him you have lost everything.” Kenny is the newer generation. He has a facebook page and knows his Google search metrics about his business. He chose the Facebook page because he believes websites are generally a waste of time, and testimony from people he’s helped is advertising you can’t put a price on, nor is it easily faked. Geg’s sentiment notwithstanding, we gained quite a lot from meeting them. Oh, and the toilet works fine. Most beautiful repair shop ever. 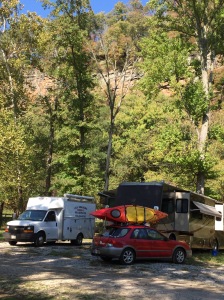