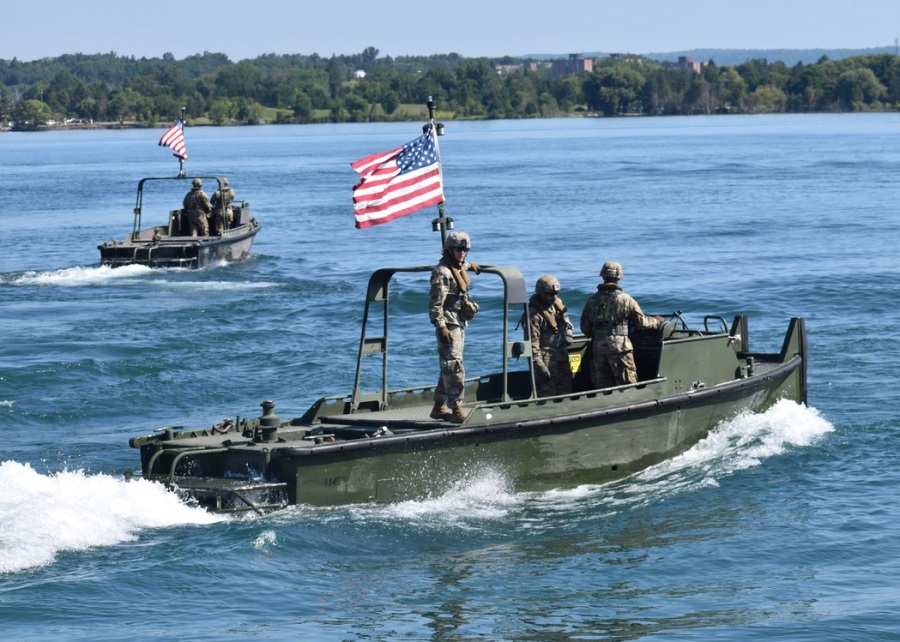 Just when you think life is getting kind of dull, the Michigan National Guard shows up to provide entertainment.

As I wrote in an earlier post, we spent a few weeks in the Upper Peninsula of Michigan to socially distance near the water and soothe our pandemic-weary souls. Our first stop was in the town of Sault Ste. Marie. Last year I wrote about the great number of freighters that passed our campground daily. The ships ranged anywhere from a puny 500 feet to 1,000 – foot behemoths, most all of them carrying ore for the steel industry through the Soo Locks. Like everything else this year, shipping traffic has changed dramatically. The visitor center at the Soo Locks is closed, but a lone officer was posted outside with large bottles of hand sanitizer and some brochures. The officer in charge, Gary told me that shipping traffic was down over 30% from last year, and most of the larger ships have been docked for the time being. Staff working on the American Side of the locks is also down, from some 600 people to 200. According to Gary, the decline in ore shipping is the result of the domino effect of steel manufacturing slowing in response to product manufacturing slowing in the the pandemic decreasing the need for steel making elements. “They’re just not makin’ cars anymore,” he said. “Probably any 2021 car models will roll off the line as instant collector’s items.” He laughed hard and I heard him tell several others the same line. We’d see one or two ships up  and down bound in the morning, and then again in the evening. Last year ships came every hour or two at all hours of the day or night. More than one time I woke in the night to hear the low purring rumble of a freighter. I’d poke my head out the window in time to see rows of lights slide by in the dark. This year, nights were mostly silent.

Freighter traffic wasn’t the only evidence of change influenced by our pandemic times. Sault Ste. Marie is a border town, it straddles the American-Canadian border. The International Bridge across the border was eerily silent. Ordinarily it’s bustling with cars shuttling between the two countries; now only the occasional commercial truck crosses the bridge. Friends and relatives on either side of the river have not been able to visit each other for months, and it doesn’t appear they will have an opportunity any time soon.  One thing we rarely saw in town last year were border patrol officers in marked cars. This year the border patrol routinely checked boat docks and the river coast. Apparently people have been making attempts to sneak across the river for a quick visit.

We are camped at the Aune (pronounced Ann) Osborn Campground, a quiet park operated by the city. Like Ohio, a mask requirement in effect. Much to my surprise, most people were very cognizant of their masks. Like everywhere else, each business entrance was plastered with signs saying “no shirt, no shoes, no mask, no entrance.” We were also glad to see some of the same people we met last year had returned. It made the situation seem more normal, and we spent time catching up on life from a respectable distance. Sault Ste. Marie is generally a quiet town; with all of the closings and hours changes it was even quieter, so entertainment was hard to come by in the campground. All that changed one day when the National Guard showed up for their practice weekend. The Michigan Guard happens to have their quarters next to our campground, so we had a ringside seat for the action.

The action started around “o-eight-hundred hours,” in the large parking area at the boat ramp between our campground and the Guard station. The regular boat dock was hauled out of the water, leaving only the cement ramp. There were several boat trailers already parked in the lot, so I imagined when the fishers returned they would have a surprise. More on that another time. Then trucks bearing objects that looked like oil tanks started arriving. We campers grabbed our chairs, phones, cameras and snacks and headed to the riverbank to settle in for the morning. More trucks with huge cranes arrived, as did other trucks each loaded with a large flat skiff type boat. We were all sitting on our side of the river wondering what was going to happen, when I noticed a familiar figure strolling across the parking lot with a red dog. It was Ben, of course. If I haven’t told you before, he is fearless about approaching people. He wanted to know what they were up to, so he just wandered over to ask. All the rest of us campground schlemiels were content to wait it out, but not Ben! He came back a few minutes later and gave us the intel we needed.  On this day they were training the Guard to set up rafts, essentially floating bridges. They are used as an emergency crossing when a bridge over a waterway is badly damaged or collapses. I never thought of the National Guard as having to practice water maneuvers, but as they are located on a border that is comprised mostly of the St. Mark’s river, Lake Michigan and Lake Huron, it makes perfect sense.

Once all the equipment was staged, we waited—and waited. I have been told that the military is a lot about hurry up and wait, and today we had an object lesson. After a while the Guard soldiers started to walk from their building to the parking lot. It was showtime—almost. First there was a muster, then boats were unloaded one at a time. They were about as unglamorous as something floating can be, but they had powerful diesel engines that filled the morning with roaring engines and thick smoke. We coughed in appreciation. They took a few practice runs in the river, returned and lined up at the riverbank. Then it was time for another muster, army talk for standing around talking about stuff. Papers were handed out. We waited some more. NOW it was showtime.

Soldiers jumped into the big trucks with the big round objects, and others manned the boats and moved out into the river. One of the trucks backed down the ramp and a crane lifted the big cylinder, raised it up over the water and dropped it into the river with a huge “SPLOOSH” the cylinder opened up like something out of a sci-fi movie and blossomed into a flat surface. We oohed and ahhed as one of the boats sped over and corralled the piece to push it out in the river. The next truck backed down the ramp and repeated the process. There were two trucks with structures that were shaped differently. they turned out to be end pieces that were ramps. Slowly but surely the floating bridge took shape in the river. It was a dangerous process. Everyone had their jobs to move the enormous steel pieces into place. We were close enough to envision losing a limb with one false move. They were dressed in full gear on a warm day, and everyone was also masked. When they completed the bridge, they pushed it to the riverbank with the boats, put them in idle to hold the bridge in position. We gave them a round of applause—no one bowed or waved. They went to lunch. After lunch, they came back and disassembled the whole thing, loaded each piece on a truck, pulled the boats out of the water. Then they did it all over again. Most of us don’t give the National Guard a lot of thought, people I know dismiss them as “weekend soldiers.” They are entrusted with helping home states with all manner of man-made and natural disasters, and spend a great deal of time preparing for many scenarios.

Words can’t do the whole process justice: here’s a slide show of the day. After that is a short clip showing one of the raft pieces in action.