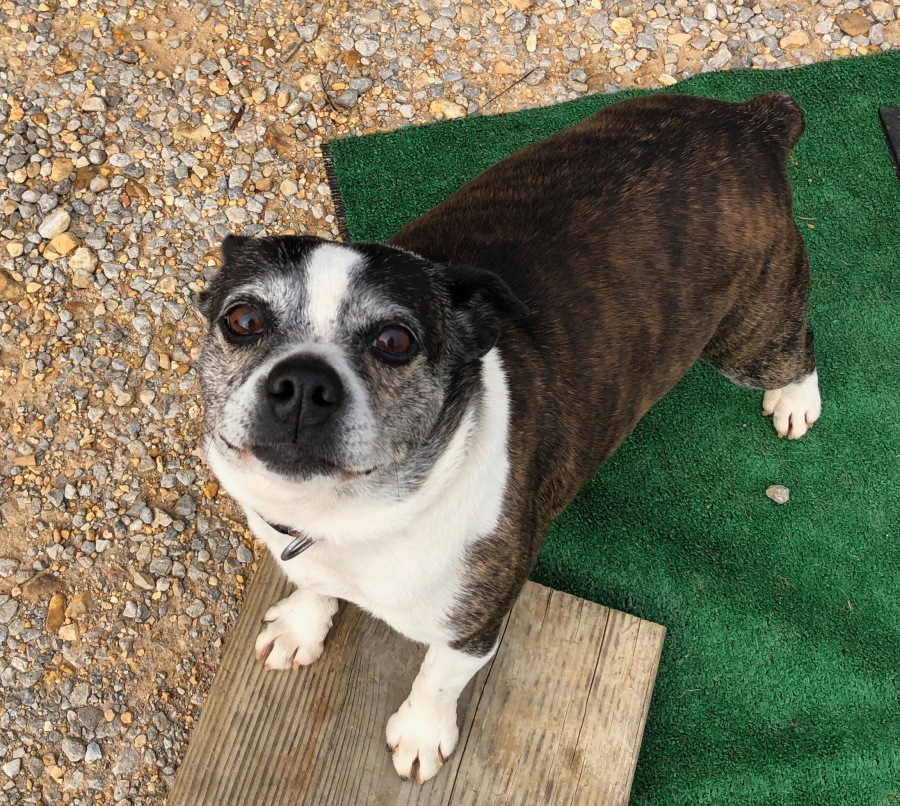 Traveling as we do we’ve met some unforgettable humans and critters. I’ve written previously about our visits to Red Bay Alabama. It is the home and headquarters of the Tiffin motorhome company. Red Bay is the place where anyone who owns a Tiffin branded motorhome takes their rig to have upgrades or repair work done. Over the last seven years we’ve made many trips to Red Bay, and we’ve gotten to know some of the residents very well. One of those people is Chris Berry.

Chris Berry is a woodworker who builds all kinds of custom RV furniture in a flash. Want to install a credenza and fireplace, or have slide out drawers for all your cabinets? Chris will do it. Chris is well-known among Tiffin owners who have spent a day (or two or three) at his shop. Customers send him crude drawings or long wordy emails describing what they want and Chris turns it into a piece of fine furniture. Chris’ expertise is not the sole reason for his popularity. His little dog Marlee is the rock star of the woodshop. She has her own fan club comprised of the many RVers who know and love her.

The first time we came to Chris’ shop, we drove our rig down a treacherously narrow county road to his house. We were immediately greeted by a small brindle Boston Terrier. She ran straight to our moving rig. Ben started to fret. “Get out there and make sure I don’t hit that dog, he said.” I jumped out and tried to shoo her away when Chris appeared. “Do not worry about my dog, she knows well enough to stay away,” he said. Sure enough, Marlee trotted along inches from the massive tires with great dignity. She supervised the entire parking process. That first visit we had a lot of work on the schedule, and we parked with Chris for several days.

Marlee promptly made her presence known. When we woke up in the morning, we’d find Marlee lying on the step of our RV. She’d peer in the door window, waiting for us to let Ryder and Henry out. She loved playing with our Red Dog Ryder. The two of them would tear all over the yard outside the shop. Just before dark, Marlee would make a final appearance to say good night.

Verifying guests was Marlees‘ first and last order of business each day. When we opened the door Marlee would hop right in to say hey.   While we were there other coaches arrived for their repairs and Marlee would dash along a well-worn path from Chris’ house to his shop to check them out. By the time we left, Ben and I had joined the unofficial Marlee fan club.

One year we came to see Chris and found the yard outside the shop to be full of dogs. Marlee, an enormous Great Dane named Wrigley, a couple of shepherd-type dogs and other hangers-on lounged in the yard. It was deer season and Chris had been hunting. The dogs were attracted to some miscellaneous deer parts. Chris knew all the dogs (and their owners) by name. Ryder joined in with the group most enthusiastically. Our little dog Henry was particularly interested in a deer leg to the point where he ignored everything else. It was a peaceable group; Marlee tolerated no squabbling or aggression. She was the Queen Bee of the pack—wherever she went all the big dogs followed. I took Henry, Gumbo and Ryder for a walk down the road and the whole group came along just to see what we would do. All the country dogs seemed fascinated at the city boy’s leashes.

Occasionally when we were driving, we would see Marlee far afield from her home. She’d recognize us and we’d invite her into our car to return home, but she had her own agenda. Regardless of her other secret interests, she was punctual about returning home and clocked in for work at the shop at 6:30 AM. Ben is a gift-giver by nature, so after our first visit he had a custom dog collar made with Marlee’s name and phone number (well, Chris’ number really) and sent it to Chris. Every now and then Ben would order her a new one. It gave Ben a lot of pleasure to see Marlee wearing the collars he sent.

As the years rolled by, we looked forward to seeing Chris and Marlee. She became gray around the muzzle, and her ardent fans showered her with treats which had ever so slightly changed her girlish figure. Chris told me she didn’t typically eat them but brought them home to save for later—and went back to increase her stash. Everyone adored the little Boston Terrier. One woman admitted to me that she had ‘kidnapped’ Marlee overnight in her RV. Marlee once took an enormous bone away from an equally enormous Dog named Camper.  Camper’s owners still love to tell the story of little Marlee’s “theft.” Chris told me the bone was twice her size but with her classic terrier stubbornness, she dragged the bone all the way up the hill to her house. Chris said another time she’d found a mostly intact deer carcass and dragged it from who-knows-how far away to home. Like all terriers, she was tenacious and strong for her size.

In May this year we were scheduled to have Chris do some work. Just before we left, we got a note from Chris that made our hearts sink. Marlee went out to make her regular rounds. Later Chris came down to the shop and noticed Marlee lying in her usual spot in the sun. He called her, and when she didn’t respond, he checked on her. She was gone. No one is quite sure what happened. Perhaps a heart attack. Other than a small scrape above her eyebrow, there wasn’t a mark on her, and she was lying in her usual snoozing position, no sign of any trauma.

Chris posted about Marlee’s death on Facebook. He said the first condolence came in seconds after he posted. The last time I checked there were close to 200 messages of condolence. Before we left Ohio Ben said he wanted to get a plant for Marlee’s grave. I chose an evening primrose plant. The plant is a lot like Marlee; tough but with sweet pink flowers. Down here in Alabama you can find them growing by the side of the freeway.

Chris is a big, brawny man with a self-depreciating sense of humor. It was hard seeing him so sad over the loss Marlee. He showed me pictures of him putting his cherished little dog to rest. He made sure to tuck her into a thick bed of soft sawdust. He buried her near her usual post close to the door of the wood shop, so she could continue to supervise customers coming and going.

Ben and I had to say goodbye to our own little dog Henry last December. Anyone who has owned a pet knows there is a lasting hole in the fabric of daily life after a pet dies. Those of us in the RV community who know Chris and his family are also sad for the loss of Marlee. Ben, our Red Dogs and I send our condolences.