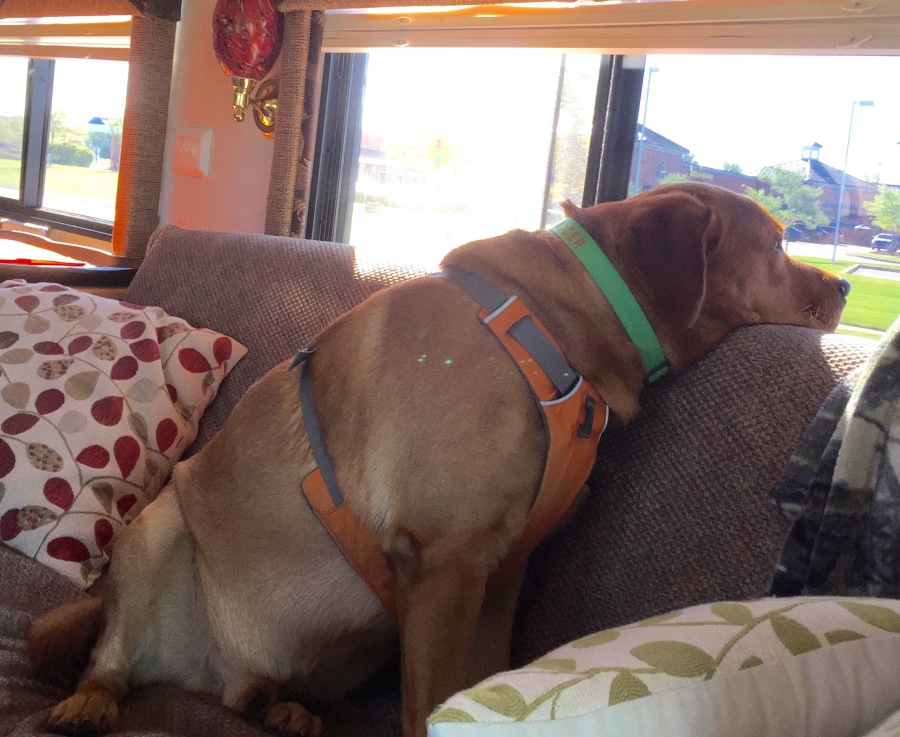 We’re off to our usual slow start. There’s something about our departure process that impedes our ability to make a clean getaway. We had agreed that we’d get underway at 9 AM. First we had breakfast and a detour after that to Tim Horton’s for Ben’s ritual travel snack of coffee and Tim Bits, which put us back home at 8:30. So far so good. Next was a slight issue with hooking up the tow car, which we’d used to go to breakfast. On the way out, we stopped to weigh the coach. It’s something one does, so I am told, and apparently our coach is overweight in the front axle. I’m unsure what there is to do about that other than fret. Because of the weight issue, Ben inflated the tires by 5lbs. I guess that’s the equivalent of changing into your “fat pants.” We also decided to top off the propane, but the operator had problems with the computer system, which necessitated summoning the entire staff of the Flying J one by one to correct. Two hours later, we were on the road for a long and uneventful ride. We always get where we’re going, but we will never move fast enough to evade the zombie apocalypse.

At 7:30, we pulled into the Wal Mart in Batavia, NY, and  parked alongside several other road warriors. Nothing beats a free place to crash, and Wal Mart is the favorite refugee camp for RV drivers. Immediately across the street is the Batavia Downs racetrack where both horses and dogs are raced. At dinner we learned from the bartender that there was to be a Weiner Dog Race event the next day. I searched for the event online and found that there is, as with greyhound racing, controversy over humane treatment of racing dachshunds. In fact, I also read a short clip that Batavia was experiencing a shortage of dachshunds so as to make a good competitive race. The article didn’t speculate as to why there is such a shortage. Whether the citizens were hiding their dogs at home or there has been an overall decline in the breed in New York State, who knows?

Gumbo and plants getting a dose of winter sun. #dogsofinstagram #reddogonwheels
Our present situation...
Our first day in Florida was a tad bit windy. Sorry for the poor video framing, now I know why Jim Cantori needs a professional film crew.
It’s kind of a gloomy Saturday, which makes it hard to get going. #dogsofinstagram #campingwithdogs
Interesting ice patterns on our walk.
Gumbo checks out his likeness on my new mug. Thanks Sally!