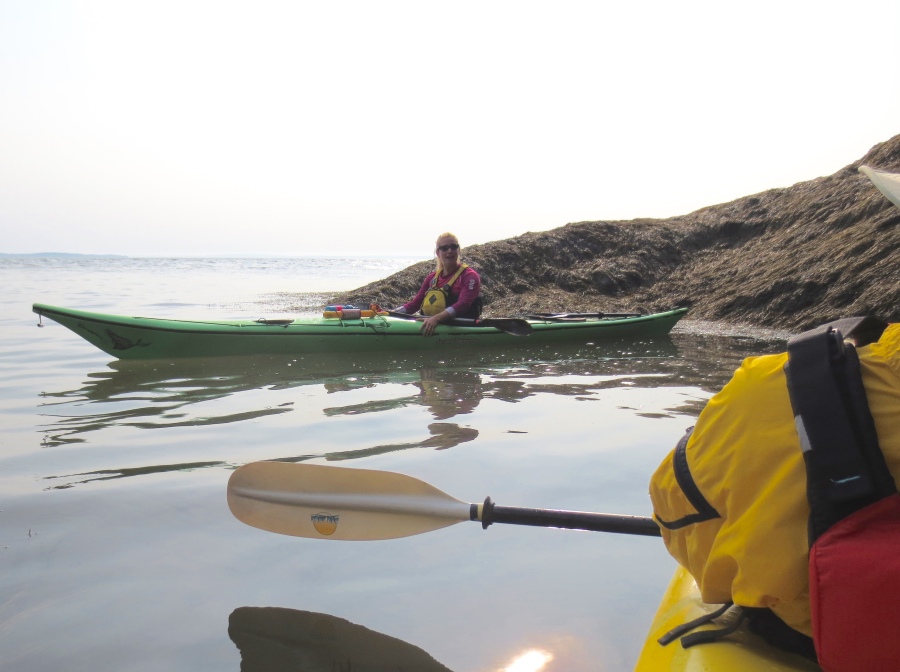 A day earlier we attempted to kayak along the Fundy coast. By the time we put in, the wind and waves were co-conspirators in knocking us back onto the shore. Our guide Amanda let us struggle in the surf for about 15 minutes, and then announced that we were going back to shore. Because of the weather, our trip was rescheduled for the following morning. Amanda is a beautiful young woman with sunny blond hair, blue eyes and shoulders like a linebacker. She is a guide for the Fresh Air company in Alma that is the primary kayak outfitter. On our short first day, she led us through the preparatory drill and as her only customers, we had lots of time to get to know her. She is majoring in outdoor education and will be finishing up her studies this year. In January she will be going to Sydney Australia to do an apprenticeship as a paddling guide. She’s particularly interested in working with kids.

This morning we hopped out of bed bright and early to be at the outfitter by 8:00. The sea was calm and hazy sunshine glittered on the water. If yesterday was Moby Dick, today was Jimmy Buffett. Much to our delight, Amanda was back to lead the trip. Along with us this time were Sara and Sue, two Boston women. We set off in tandem kayaks without incident, and paddled up the coast.
It took effort on our part to keep up with Amanda and her sleek boat. We were bundled up in yellow paddling jackets, extra fleece and sun hats, sharp contrast to Amanda, who admitted she at least needed a shirt with sleeves for this morning. We four were the goofball ducklings trailing after a swan. Amanda’s speech was punctuated with “whatnot,” as in “we get a lot of snow, ice and whatnot in the winter.”
The coastline in this part of the Fundy bay is heavily treed and the view changes with the tide. Eagles perch on branches, and there are rocky stopping points called “beaches,” but there is very little that is beachy about them. The rocks are carved out by the wind and water. This part of the coast is not as dramatic as popular tourist locations like Hopewell Rocks, but it benefits by appearing as god and wind and water made it. We stop after about an hour and a half of paddling for a snack, where I try the dulse, a seaweed snack. We we are told “everyone eats dulse and whatnot.” It’s a little like a chewy version of nori. Amanda gives us a lesson in how the tide works by using rocks as a solar system to illustrate the pull of the sun and moon, and draws a map of the Fundy Bay in the sand to explain the hydraulics of the area. I predict her future students will be head over heels in love with her.

On the way back, the wind kicked up again, but this time it’s at our backs and gives us a shove toward the take out point. The swell starts to grow too, and by the time we’re within sight of landing, the waves take us into the mouth of the estuary. Whomever is scheduled for the afternoon session had better be an experienced paddler, or be lucky enough to be under the watchful eye of a mermaid.

One thought on “Mermaid”

A monthly literary journal of travel essays and photographs.