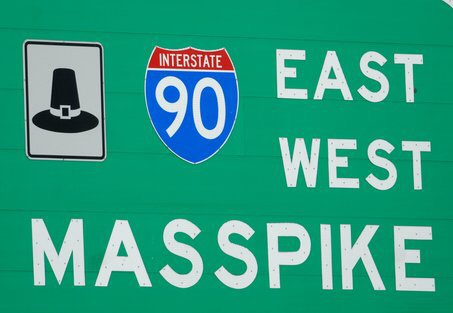 Interstate highways are fine if you’re in a hurry. Otherwise, they are boring and filled with truckers with bad attitudes. We were in a traffic Jam on the Mass Thruway near Boston, where mean aggressive drivers are legendary. We overheard this exchange on our CB Radio:
“What’s the holdup on southbound?”

“Nah, just too many Massholes and not enough Massphalt.”

We were laughing until the “Massphalt trucker” said this:

“Fu**ing goddam piece of shit RV (meaning us), get out of my lane.”

Once we got past all the traffic merging from the on ramp we moved over. Massphalt roared by and flipped us off. We decided he was more appropriately the Masshole Trucker. It was time to get off the highway for a more pleasant albeit slower drive. We turned off and left the Thruway behind as we entered New York.

In New York, we are traveling west on Route 20, which parallels the Thruway. It’s designated as a scenic byway, which is code that translates to mean “the road abandoned when the big highway was built.” It’s a great road so far. You can tell what the economy of each county is like by the condition of the pavement. Presently 20 is a smooth stretch of 4 lanes. We are rolling through the hills between the Adirondacks and Catskills, through towns like Duaneville, Sloanville, Skaneatateles, Oondaga and Morrisville. Some are still prosperous, others are all but extinct, streets lined with boarded up motels and storefronts. Cherry Valley was one such stop. The view from the road was jaw-dropping, but the handful of stores lining the road were abandoned long ago, probably not long after the New York Thruway opened. Great scenery alone does not make a healthy economy. Outside of Avon we had to pull over to check on our tow car. The auxiliary braking system had gotten quite a workout on all the hills, and had drained the car battery. Ben Made some adjustments and we were back in business. We were just getting ready to get underway when there was a rap on our door. A woman in a simple dress with braided hair stood there. She’d passed us and noticed us messing with the car so she turned around to check to see if we were OK and needed help. Those who say New Yorkers are unfeeling are wrong.

Route 20 skirts the northern edge of the Finger Lakes area. Towns here are much cuter, and lined with wineries and stores with coy names like “Back in Thyme” and “Grape Expectations.” Cayuga lake is the biggest one in the region, and it was dotted with sailboats when we rolled by.

The road winds up, down and around the hills, with rewarding views at each turn. In this higher elevation, leaves are just starting to get some color. There’s always a crazy maple tree that turns bright red before anything else, and birch trees were starting to turn golden. In a week or two it should be a spectacular drive.

We arrived at our pit stop (chez Wal Mart) in Batavia to spend the night. Tomorrow will be our final leg back to the sticks and bricks.

2 thoughts on “The Massphalt Trucker”