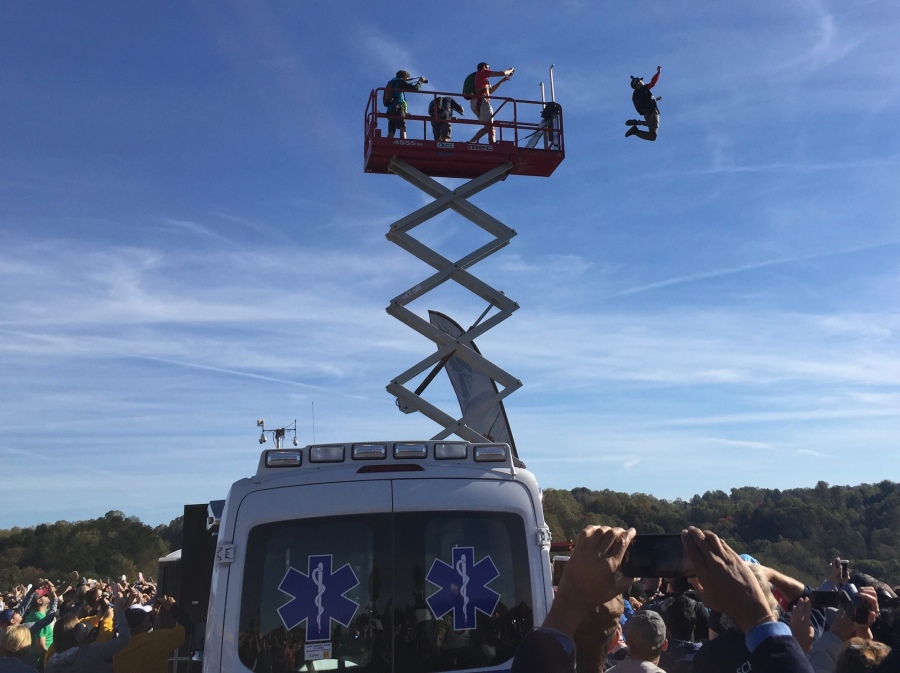 When I called to make reservations at the New River Campground the owner told me we were lucky to get a site on Bridge Day weekend. I feigned understanding and agreed that I was indeed lucky. When I was done with the call I promptly Googled “Bridge Day.” It takes place on the third Saturday of October in Fayetteville West Virginia. Route 19 over the New River Bridge is closed for a day to allow hundreds of BASE jumpers to leap off the bridge. Bridge Day hadn’t been on my must see list. Now it was. Proximity has a way of re ordering your priorities.

To give you an idea of the logistics involved, imagine if 7 miles of major thruway that allowed access to your city including major city intersections were shut down entirely for a whole day, and that detours added serious time to your commute regardless of your starting location; that unsuspecting through travelers would be diverted onto miles of twisty back roads through the mountains. Imagine too, that you were a vendor in a city of 2,852 souls and you could count on 80,000 onlookers to invade your town wanting to buy stuff and eat food. Bridge Day is a very big deal indeed. We were staying at a campground about 20 miles north of Fayetteville. We had done some reconnaissance work earlier in the week and decided our best bet was to pull up stakes and camp out at the Fayetteville Wal-Mart. We left early Friday morning and headed for town. We parked at the back by a nice wide patch of grass, and boom-diggity we had a home. It’s these times we perform obligatory Wal-Mart shopping as a thank you to to the store for free all-night parking. As fate would have it, my 20-year-old coffee pot became incontinent on this trip. More coffee was leaking onto the counter than was going into the carafe, so $21.00 later we had a new unit and guilt-free parking. As a bonus, the store was also a Bridge Day shuttle stop. Sure enough, we looked out our window Saturday morning and there was a line of school busses ready to haul people to the bridge. An impressive amount of people were also waiting on line before 7:30. We dallied quite a bit, but were on a bus by 9:30.

What had been a bustling freeway the day before had morphed into a four-lane parking lot. Hundreds of cars were parked on berms and in the median for miles. The city fathers and mothers also placed rows of portable toilets here and there in the median area–genius planning. There was a huge motorcycle parking area and a designated handicapped parking area—all on the closed freeway. We were dropped at the front gate. A brief check in and search at the gate, and we were in. We ran a gauntlet of food, craft fundraiser and political booths to get to the stands where the BASE jumpers were doing their thing. People are allowed to make as many jumps off the bridge as they can between the hours of 9:00 – 3:00. At 5:00 everyone and everything is packed up and the highway reopens.

To be allowed to BASE jump on the New River Bridge, prospective jumpers are required to have done at least 100 parachute jumps. A BASE jumper’s major obstacle is altitude. A skydiver opens her chute at around 2,000 feet, and they can open their parachutes in a way that reduces the jerk of the lines. They also have a back-up chute if the main one fails. BASE jumpers start out well below 2,000 feet. In the case of the New River Bridge, it is 876 feet. That is not a lot of fall time—less than 5 seconds of free fall before impact. Most BASE jumpers don’t pack a back up chute. To open their chutes, they deploy a pilot (smaller) chute by throwing it out at just the right moment. Steering is a big deal for the BASE jumpers. When you are looking at the pictures, note how tiny the target area is, and how much other stuff there is to hit—trees, rocks, water, train tracks and the like. Being able to steer away from an object makes the difference between living to jump again and—splat. Jumpers are all ages. At one point the announcer said the oldest jumper was 83. A guy in a wheelchair jumps every year, wheelchair and all. If you are interested enough to jump but lack training and have a very full wallet, you can strap yourself to another jumper and take the leap.

As we walked to the launch area we fell in behind a few jumpers. They were easy to identify with their parachutes, harnesses and helmets festooned with cameras. Some of them had two cameras on their helmets to get the view coming and going. Others had wrist mounted cameras and some had extra-beefy looking selfie sticks. In the BASE jump area there were a few choices for launch method. There was a static platform aligned to the deck of the bridge and a scissor jack platform complete with a staircase that added another 50 feet to the regular 876′ launch height. If that wasn’t enough boost, there was also a catapult chair called “The Human Rastapult” that would hurtle the occupant out over the gorge in much the same way farm pumpkins are launched on trebuchets.

From our vantage point on top of the bridge it was hard to get the whole start to finish jumping view. We could see the initial jump, where people would do anything from a hail Mary style leap to somersaults off the platform. We’d lean over the edge of the rail and look for the jumpers, but we were unable to see them until their chutes opened and they would drift across the gorge. If we go again, I think we’ll take a shuttle to the bottom of the gorge to watch them descend.

At one point we got directly behind the jump platform. The people were within arm’s reach from where we stood. As people ascended the stairs, there were other jumpers standing around waiting their turn. It was interesting watching them rehearse their moves. There were quite a few first-time BASE jumpers.

I don’t have pictures of this moment, but there was one young woman who went out on the platform to jump. She stood there for a few moments, and then backed away from the platform. No one made a sound. About a half hour later, the same woman approached the platform. She stood there for a moment. The crowd began to cheer. She spread her arms and dropped into space to thunderous applause and shouts. She landed safely a few moments later. As each jumper approached the platform, there was someone there to check through their equipment and provide support. There aren’t enough words to describe BASE jumping, so take a look at the photos. If you’re ever through Fayetteville on the third Saturday in October, check it out. After you look at the slideshow, check out the video of the jumps here: Bridge Day Video