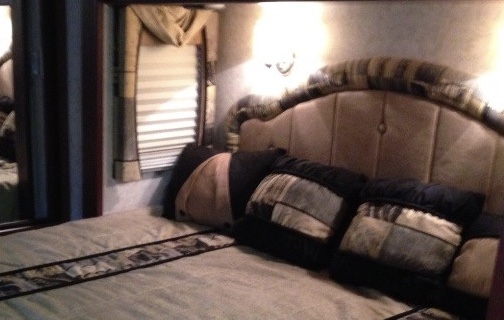 The first week of travel on our annual winter excursion usually includes stops at various businesses that cater to people with RVs. This is the time of year we schedule what I call “facelift work” or “stuff Ben thinks is a good idea to do.” It’s become a ritual.

People who own trailers and RVs break down into two groups. There are those who continually fuss and tinker over the unit, and there are those who simply drive until something breaks or falls off, fix that and drive until the next breakdown. Those of you who have read previous posts can probably figure out which category my street-rod husband belongs to. It should come as no surprise to know that I belong to the latter group. That makes for interesting exchanges when we discuss our motorhome. The conversations usually go something like this:

Him: “Do you like the window valances?”
Me: “They are kind of weird, but I’m used to them and really don’t notice them.”
Him: “I think they are ugly.”

Translation: We will be getting new window valances. Here’s another conversation.

I shouldn’t have to translate this one for you. It’s not that I don’t care about such things. You have to understand that I was raised to believe that when you bought a vehicle you were stuck with what you got and ran it as is until it died. It never occurred to me that someone would or could change out things like seats, knobs and steering wheels and the like for something more attractive. When you hang around with a street rodder even under the hood stuff like wires need to match and headers have to be shiny. New window valances and wheels were a part of the overall motorhome beautification plan.

This year all our facelift stops were in Alabama. At the first stop we got aluminum wheels. It was an interesting process. I’m unused to big vehicles and I couldn’t imagine how much work it would take to change four big wheels and re-mount the tires. We pulled into Kimbroughs RV Repair in Florence Alabama. We were the last customers of the day. We unhooked the Subaru and pulled into a big repair bay. A guy put our leveling

jacks down far enough that the tires just lifted off the floor. In case you’re wondering, they also have huge lifts that can raise an entire coach off the ground to do under carriage work, but it wasn’t necessary this time. I was a little disappointed because I would have enjoyed seeing that. A team of guys jumped on the wheels with NASCAR pit crew speed and in about an hour we had our new wheels.

Our next stop was the tiny town of Russellville Alabama to see a woodworker for the valances I mentioned earlier. Before I tell you about him, I need to mention something about motorhome decor. Older coaches like ours are typically tricked out like bordellos or funeral homes. Gaudy shiny fabric, crazy patterns and weirdly fancy lighting fixtures. Ours was in the funeral home genre of decor. The bedroom windows  were draped with

headboard, cut the swags off the windows and got new lampshades. Only the offending valences were left to deal with. They were covered with fabric printed in a design that resembled monkey faces. I am not exaggerating. The beady eyes follow you wherever you go. There is a picture, see for yourself. They had to go.

I wrote about Chris last year (see There’s a Guy for That). This was our third trip to his shop. He works mostly on Tiffin motorhomes, creating all kinds of modifications to motorhome cabinetry. He’s built everything you can imagine. If you want to read about that, you can check out my older post. His schedule is booked months in advance; everyone, just everyone goes to Chris for work on their motorhomes. This is the third

year in a row Chris has done work for us. He created built in end tables, pull-out shelving and other things for us; this time he replaced all our monkey faced valances. What I want to tell you about Chris is what a generous soul he is, filled with good humor. While Chris was building the valances, Ben was also tinkering with small projects. I busied myself with entertaining dogs and generally staying out of the way. Chris hopped right in to help Ben with things that weren’t on the “list.” He loaned tools, gave Ben little doodads and bits of hardware for whatever he was working on, and when we were struggling to make a sound bar work he took time out to help with that. He is definitely an Alabama boy. On a sunny day he knocked off work late afternoon to go hunting. Shortly after sundown, he came back and finished the job for the day. Oh, and he did get his deer, which was in the truck and our red dog circled it with his nose in the air in great reverence. Chris asked me if I liked venison. I told him it had been years since I’d had any (my dad used to hunt). I now have steaks in my freezer waiting for the grill. We had settled up and were ready to go when Ben mentioned a drawer that didn’t work right. Chris looked at it and took the whole thing apart and installed new rails in 20 minutes.

When we left, Chris gave me a big hug and said “you all come back any time.” We’re going to have to come up with another project so that we have an excuse to see him, his family and little dog Marlee. Maybe he can make us a totem pole. If you’re interested in seeing his work, he has a facebook page called “Making Sawdust.”