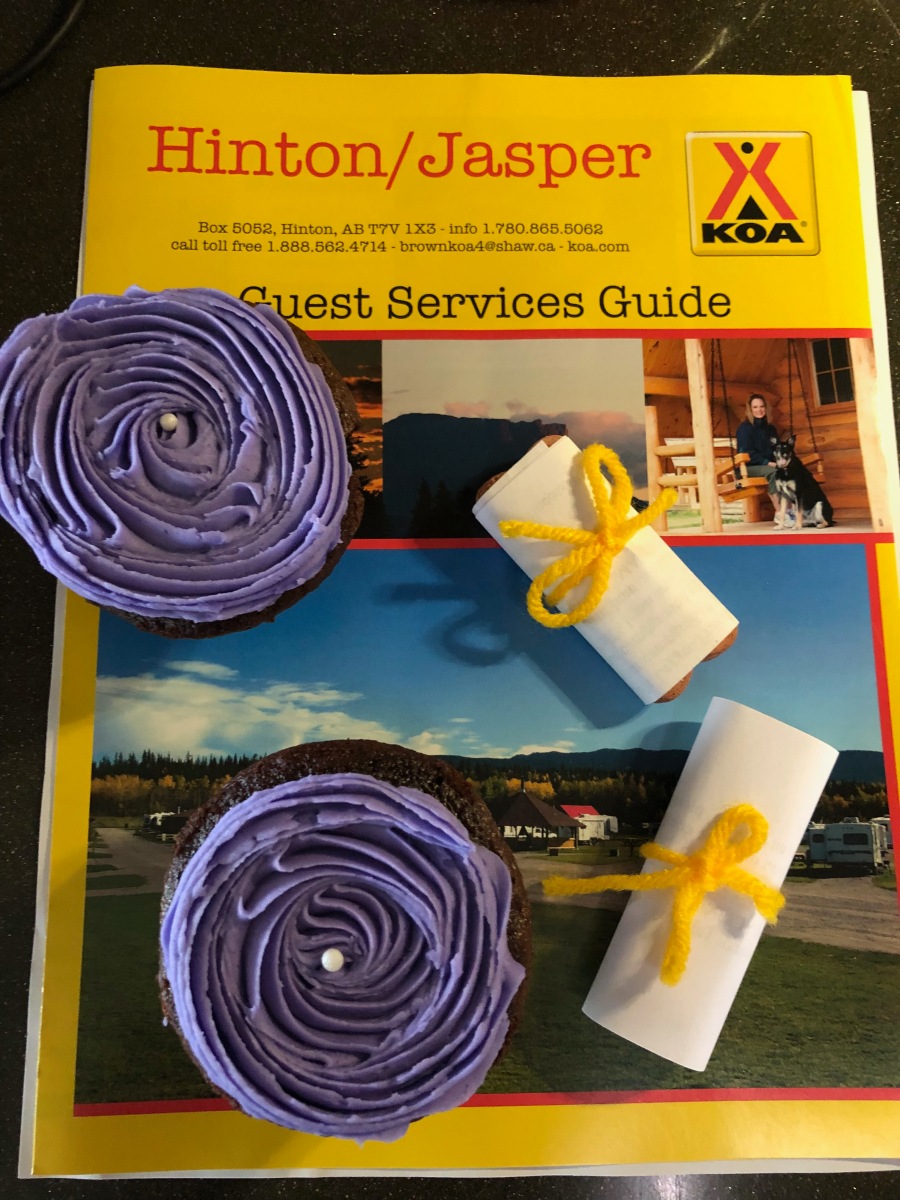 “You haven’t written much since we got to Canada,” said Ben. He’s right. Our days have been filled with exploring the area in our limited time here. We are far enough north that the light lasts well into the evening, with sunset around 9:00 and darkness around 10:30 PM. That makes for long, busy days.

Our first stop was in Jasper National Park. I tried to get a spot in the park’s campground and failed. Canada opens reservations for campgrounds in January on a rolling basis. Jasper was one of the first to accept reservations. I delayed getting online by an hour and found that all the sites were booked. I started searching for another place to stay and booked a site at a KOA Kampground located in nearby Hinton. As a rule I am not too fond of the KOA franchise; KOA tends to favor volume over nature in their setup. When we arrived at the KOA, I was surprised to find it nestled in among mountains and three working ranches. The sites were what I call “KOA Klose” but the surrounding scenery made it quite pleasant. One of the pastures was mowed for the running pleasure of dogs, which our big red dog enjoyed immensely. Oh, and we got free cupcakes (KupKaKes?) when we arrived because it was the owner’s birthday, and she had extras. The dogs got cookies as well. Such hospitality.

The Jasper park entrance was about an hour away from our location and we were only staying five days, so logistics factored heavily into our scheduling. The town of Jasper is within the boundary of the park, so going anywhere requires a stop. Jasper is a cute mountain town full of restaurants, outfitter stores and the usual trinkets, t-shirts and trash establishments. It has a laid-back vibe that made us think of Moab. When we’re home, we feel unique driving our Subaru laden with bikes and kayaks. In Jasper, everyone had their cars draped with all manner of bikes and boats, so we blended in quite nicely. We took our bikes off the car but left the boats on, and headed for the park. A few miles from the park entrance, we passed a sign that read MANDATORY BOAT INSPECTION: ALL BOATS MUST STOP. We had a moment of hesitation—could they mean our dinky boats? We were used to Ohio, where no one inspects much of anything. We decided to pull in; better to be waved off than to incur offical wrath. It indeed was a full-on boat inspection. The two young rangers told us that inspection checkpoints are typically located at water access points. Boats are inspected for cleanliness and owners have to answer questions about where you are from, where you are going to, and what was the last body of water you put into. The Canadian Wildlfe Department is very concerned about invasive species like zebra mussels. We were given a clean bill of health, and a certificate of inspection which we were to carry if we ran across another inspection point. Since we went back and forth daily to the park and always had the boats on the car we got pretty familiar with the rangers at the inspection point. Ben admired their truck, a big shiny half ton thing with a sunroof and a nice sound system. “Well, it’s just a lease. We’re not allowed to keep nice things,” they answered. Ben allowed as at least they had a nice ride for the duration, so they really couldn’t complain. “If you were in Ohio,’ he said, you’d probably be driving a beater.” Another time we asked them where to put our boats in when we were in Banff. The answer was a bit mystifying. “Well, you can put in on the Bow river, but you have to get there spankin’ early or you’ll be hooped.” I had a pretty good idea what “hooped” meant, but I asked her how early it had to be for “spankin early.” She told me 9:00. Later on I met a farmer who told me “spankin early” was 4 AM. I guess it all depends on your age and your occupation, this Canadian time telling.

Our short time in Jasper was occupied by hiking; one of our favorite hikes of our whole Canadian trip was in the Maligne Canyon, which I’ll tell you about later. At the moment we have things to do, so I’d better get going or I’ll be hooped. Here are a few more photos from around Jasper.

One thought on “Cupcakes in the Mountains”