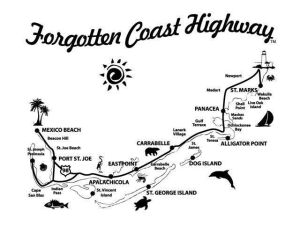 We decided we should see Mexico Beach, a few miles west of Port St. Joe. To get there you cross over a bridge and a short causeway on Hwy 98. The Gulf is a few hundred yards to the south. For those of you who have never been, Mexico Beach is a quintessential Florida beach town—rooted firmly in the 60s. Older hotels topping out at 5 stories decorated with dolphins and painted island colors are interspersed with condos, cottages and vacation homes with goofy names, gift shops and food shacks selling fried shrimp and oysters, and an immense white sand beach that stretches the length of Mexico Beach. It’s the kind of a beach for a family. There are a fair amount of bar/restaurant options, but there’s no bar hopping to be done on the main drag, so it’s never been the Spring Break destination in the way of Ft. Lauderdale or Myrtle Beach. Mexico Beach was also ground zero for Hurricane Michael last October. If you keep your eyes on the Gulf as you pass, it’s easy to fool yourself into thinking that little has changed. Turn your head to look inland and the reality is that everything has changed.

The town has been forcibly yanked into a new era by Hurricane Michael. Only a few houses remain standing. Surviving homes also sustained heavy damage. Bare foundations and giant mounds of debris stretch as far as you can see. A few lucky people have trailers or RVs parked near the blown-out shells of their homes, but most others are homeless, living in shelters or with friends and family.

We left Mexico Beach and continued west past Tyndall Air Force Base. The base was shattered; hangars were collapsed and buildings were shredded. In the past trees lined the miles of fence that gave the base some privacy. Now there are just miles of tree stumps backed by shiny new chain link fence. There is activity at the base; after all, they are prepared for much worse, but the family homes are all vacant. There were acres of tall pine forest around Tyndall. we drove past miles of trees that were snapped in half like so many bent pipe cleaners. The broken trunks fell in the same direction—south towards the Gulf. For miles. A little further the direction changed, and the broken trees pointed north.

We headed into Panama City, which also sustained much damage. Miraculously the Wal-Mart was open. I went in to get a baking pan and was surprised to see only a few shelves of kitchen equipment—most unusual for a store that usually has about an acre of kitchen gadgets. That’s when it hit me that it was probably amazing that there was anything left to buy. It was foolish of me to expect to find something so mundane when thousands had to replace every possession they had. I read in the Northwest Florida Daily News that “out of 2,700 dwellings [on Mexico Beach], the city reports that only 500 are currently habitable.”

We’d seen enough. Depressed, we headed back. You won’t see any pictures of Mexico Beach in this post. If you’re curious, I added a link to a photo story from the Panama City News Herald at the end of this post. It seemed heartless, even obscene for me to stand around and snap pictures of other people’s misery. After Katrina ravaged New Orleans friends tol me that the local bus tour companies took people into the Lower Ninth Ward to “experience” the destruction. Nothing angered local folks so as seeing an air-conditioned bus full of gawking tourists roll by as they tried to put their lives together. I thought of that when a Lexus pulled over abruptly. A woman scrambled up on a ruined foundation to get a better shot of the destruction ahead. Maybe it was her property, or maybe she was an insurance adjuster, and maybe she was a tourist trying to get an impressive picture. I was about to judge her when it hit me that I too was just another disaster gawker, like the busloads of tourists in the Lower Ninth Ward.

Still it was something I needed to witness, mainly because I knew what it was like before. I pray to God that neither I nor any of my loved ones experience such an ordeal. I like to kid myself that I am not much attached to things and that it is better to save living beings than stuff—which is true. Still, place and possessions represent the life you have lived. A survivor was intereviewed on TV and described watching as the remaining structure of her home was torn down. She said the bucket crane pulled up a scoop of debris and dangling from the teeth of the bucket was the remanants of her wedding gown and veil—all dumped in the disposal truck. How do you live through that? In spite of the acres of heartbreak, for every busted-up property I saw an equal number of hand painted signs that said “We’ll be back,” or “Opening in March,” and “tougher than Michael.”   We live on this Earth through the grace of God, Allah, Mother Nature or the whims of Chance, whatever you believe. People are incredibly resilient and willing to take incredible risk against impossible odds.

One thought on “Mexico Beach”