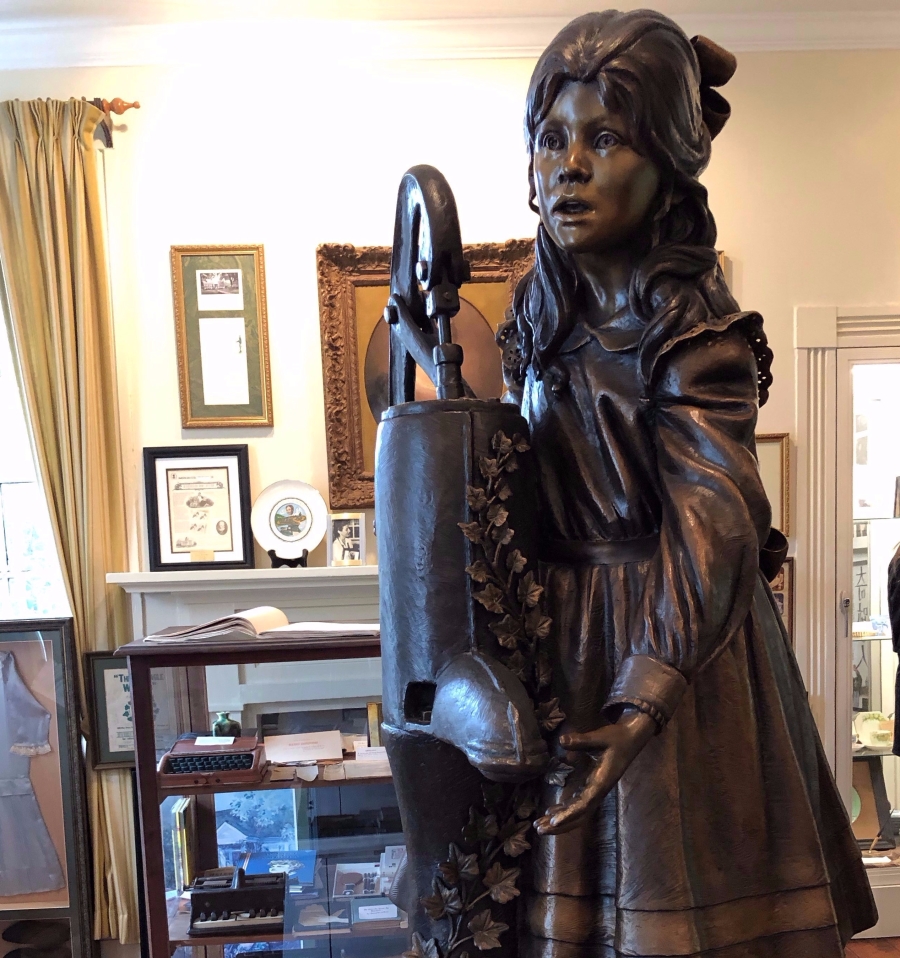 After extended time on the road we stop here and there on the way home for maintenance on our RV. That is how we came to be in Tuscumbia Alabama, where there is an excellent generator service business. Tuscumbia is also the birthplace of Helen Keller. Her childhood home and scene of the famous water pump awakening was 6 miles from where we were parked. A pilgrimage was in order.

Ivy Green, The Keller homestead, is a well-appointed southern home reflecting the life of an upper-class family. I was surprised at the size of the home; in my mind I thought it would be much larger. Museum curators are quick to point out that nearly all of the items displayed in the house belonged to Helen and her family members. The home is filled with hundreds of pictures of family and of course Helen, as a child, a young woman, adult and senior citizen. She was photographed with just about every notable person of her time. We toured her home, looked at all the memorabilia and listened as our guide Miss Jennifer told us interesting facts about Helen. Most of her talk covered old ground for me, but for Ben it was new information. We saw the dining room, site of the famous Anne vs Helen breakfast battle, the summer cottage next to the house, and yes, the water pump. Ben marveled at her accomplishments, the Braille books, her handwriting and the recording of her voice. I had a new experience of Helen through him.

There’s a very good chance that your knowledge about her starts and stops with either her autobiography The Story of My Life or its dramatic adaptation, The Miracle Worker. I first learned it was possible to “talk with your hands” when her autobiography was assigned to my elementary class as a reading project. The manual alphabet was printed in the back of the book. We practiced the hand shapes in class and for weeks after we had fun spelling out messages to each other in class until our exasperated teacher forbade fingerspelling in class. Anyone caught fingerspelling would get swatted on the hand with a ruler. My Deaf friends will find this ironic—apparently everyone gets punished for signing at some point. Flash forward to now, and for many years I have worked as a sign language interpreter. Because of that background, I believed I knew a lot about Helen Keller, but I never really considered her as a flesh and blood person.

Helen became a rock star in her time because she was able to learn; her “career” became showing off her intellect. In the 19th century it was commonly believed to be impossible for a Deaf-Blind person to be capable of rational thought and learning so grievous was the disability. Two women proved otherwise. Laura Bridgman was documented as the first Deaf-Blind person to be educated at the Perkins School for the Blind. Helen Keller was born in 1880, 50 years after Laura, though little had changed regarding attitudes about Deaf-Blind people, and sign language in general was largely repressed. Helen was blessed with a connected family with resources. Alexander Graham Bell was a family friend of the Kellers. It was Bell who suggested Helen’s father contact the Perkins School for the Blind to secure a private teacher for his wild daughter, as Bell knew of the school’s success with Laura Bridgman. That’s how Anne Sullivan came to the Keller home, and the rest you can learn about by watching the movie The Miracle Worker.

Helen Keller, bright, attractive and from a well-to-do family was celebrated by the media, and became a must-meet person with influential people of the day who marveled at her ability. The earliest article I found about Helen was published in the Harrisburg Telegraph in1888, when she was 8 years old. The article marveled that “her desire for knowledge and her natural mental quickness to learn bids fair to attract as much attention as the famous Laura Bridgman.” She earned a college degree with the help of Mark Twain, who paid her tuition. It was her benefactor, Mark Twain who first called Anne Sullivan a “miracle worker,” and indeed the titular drama is really about Anne Sullivan rather than her student. Most people believe that without Anne, Helen would have remained as she was, though to me her obvious intelligence suggests otherwise. I imagine that is the experience of every bright person who does not learn as others do, to have their intellect and abilities devalued by others. When she began writing, she was accused of plagiarism or having others write for her.

The general public thought Helen’s abilities were magical. This came in handy when she had some lean years. Her father lost the family fortune, selling off chunks of the Ivy Green farm until it became a fraction of its original 160 acres, and money was tight. Helen and her teacher Anne Sullivan spent several years on the vaudeville circuit showing off her deaf blindness and intellectual prowess. Her public image was carefully managed; I read that her eyes were misshapen and as a result she was only allowed to be photographed from her “good side.” Later she had her eyes removed and replaced with prosthetics to make a more “pleasing effect.” I wonder if that was her idea. She wrote about her moments of despair. It must have been a lonely life, to be an icon. Helen spoke to millions of people, but only a handful of people learned to communicate with her. Nevertheless, she persisted, and made her world as wide as she was allowed.

She loved dogs. She is quoted as saying “They have always been my companions. A dog has never failed me.” There were numerous pictures of her and her many dogs at Ivy Green. The one I’ve posted here is my favorite; it’s one of the few pictures of her that doesn’t look carefully posed, though her “good side” faces the camera. I’ve held my own dogs like that; softly so they don’t pull away, my nose buried in their fur. If you’re a dog person, you know how comforting that is, to be so close to your pet. The expression on her face is soft, her smile relaxed.

Helen wrote several books. She became an anti-war activist and a suffragette. She championed all kinds of causes, especially for blind and Deaf-Blind people. She was a Socialist, and an advocate for birth control. It was her advocacy for blind people that prompted the Lion’s Club of America to make vision loss their mission. In fact, her advocacy for blindness overshadowed advococy for deafness and hearing loss, though she did raise awareness of hearing loss just through her presence.

Many years after my infamous “sign language incident” in elementary school, I became a sign language interpreter—not because of reading about Helen Keller, but that’s another story. I’ve met hundreds of people who are Deaf-Blind over the years, and most of them are doing very well. Some also struggle in a world that still isn’t willing to accept differences. Technology has made a huge difference for Deaf-Blind people, as have changes in laws and ideas about accessibility. The Helen Keller National Center for Deaf-Blind Youths and Adults provides education, rehabilitation and training for youths and adults who are Deaf-Blind. In a way, expectations for people who are Deaf-Blind are more miraculous than in Helen’s time. Deaf-Blind people these days are expected to learn, get a job, get married, have families, cook dinner, do laundry and file their tax returns—just like everyone else. Just like Helen, modern Deaf-Blind people rely on others to navigate the world at large; sign language interpreters like me, and Support Service Providers (SSP). Helen’s access to the world came from her prodigious reading and her two guides in life. Anne Sullivan, the original teacher from the Perkins School for the Blind, and Polly Thompson, who started as her secretary and later assumed Anne’s role as interpreter and guide. Anne and Polly were Helen’s flesh and blood connections to the world. I find it remarkable that Helen acquired such a broad range of interests considering her experience of the world was funneled by two people spelling into her hand using the manual alphabet. It must have been arduous for them all. It was obvious that Anne and Polly were precious to her. Both women stayed with Helen their entire lives. Helen’s ashes are interred in the National Cathedral in Washington DC, along with Anne’s and Polly’s ashes.

I stopped at the famous pump, where Helen had her childhood revelation that helped her make sense of the world. It’s hokey, but I put my hands on the top of the pump and asked Ben to take my picture. I admit I was disappointed that it no longer pumped water; its function disabled long ago. I thought about my grandmother, who lost her sight and hearing as an adult after a bout with meningitis. Her sight came back, though she remained deaf for the rest of her life. She never learned sign language, that wasn’t something that was encouraged back then, just as in Helen’s time. Still, my grandmother was a resolute woman, and she also persisted.

As we were leaving Ivy Green, school busses unloaded an army of elementary school kids at the gate, making a long line on the walkway to the house. We congratulated ourselves at getting through the museum before the crush of kids. I expect those kids had the same experience of Helen Keller as I did; her disability, her water pump revelation, the thick Braille books and the few gadgets she had and wow, she met a lot of people. They will see some grainy video showing Polly and Helen communicating, Helen talking, and a rare segment of her with Anne. As an interpreter, I noticed how Polly cues Helen to pause while she realys what Helen has just said. Maybe a few of those kids will take some time to read a bit more about the person she was. If they bother to learn the manual alphabet, I hope these days they don’t get their hands smacked for fingerspelling in class. Take some time to visit, if you’re ever in Tuscumbia. I found a nice little virtual tour created by Kimberly Killeri on You Tube. You can enjoy it here.

5 thoughts on “She Loved Dogs”