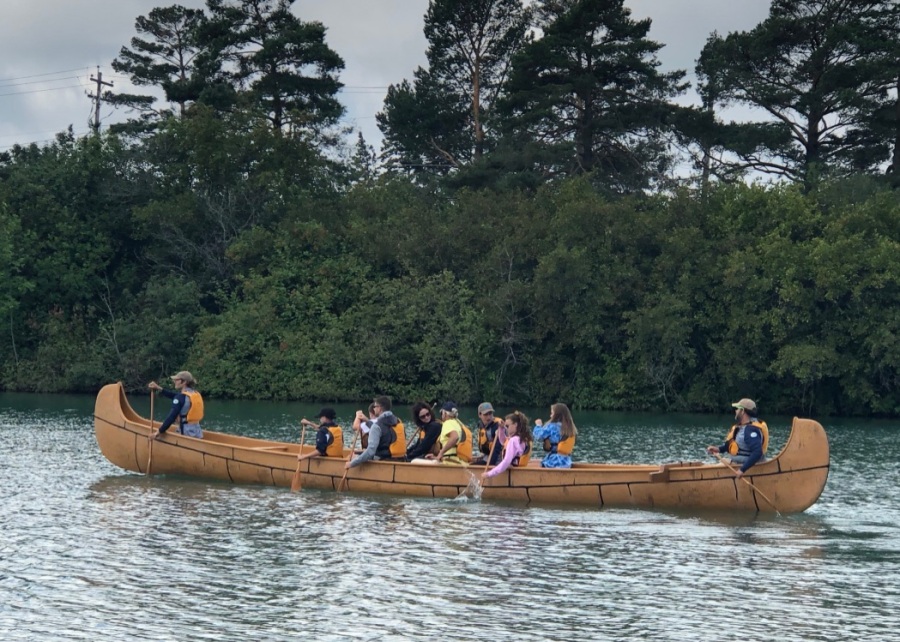 Having ticked the major boxes on our trip to Sault Ste. Marie in the Upper Peninsula (Soo Locks and Whitefish Point) it was time to check out a few other area attractions. We were in the area at kind of a shoulder season of sorts, in that summer festivities were over but fall/winter activities had yet to kick in. We got lucky, because of the the annual Soo Ultimate Paddle Day festival. In the ultimate moment of serendipity, it was scheduled on our last weekend in Sault Ste. Marie at the city park which was a short stroll from our campground. The Ultimate Paddle Day featured various canoe/kayak/paddle board races, a biathlon and kid-friendly competitions, all done with a typical UP twist, like the the “Portaging Portage Race.” Two-person teams complete a run/paddling race. One team member paddles two miles to meet their teammate in downtown Sault Ste. Marie. They then portage (that’s boat-speak for carry) the boat two miles down Portage Avenue (Portaging Portage, get it?). When they arrive at the second put-in site, the second team member paddles the remaining two miles to the Paddle Day site. Just so you know, most boaters gripe about a portage of a few hundred yards, let alone lugging a boat two miles. Races for boats and paddle boards were held. We walked to the finish line in time to spot a woman on a paddle board out in the river. She was one of the race competitors, paddling furiously to the finish line. She came up on the bank near me, and I congratulated her on her run. She laughed. “Well, at least I finished!” I chatted with her a bit. I am in awe of people who paddle board and those I have met swear it’s really easy and they gave up their canoes/kayaks for the paddle board, blah, blah, blah. My new friend was no different as she proselytized about the benefits of the paddle board. She asked me if I wanted to hop on and try it. You who are my loyal readers know my legendary lack of balance and I wasn’t really dressed for swimming so I declined. Later that evening I recognized her paddle board on top of a car in our campground. I stopped by but there was no one around. She was probably out doing some other strenuous activity that required good balance.

There were rides in replica “voyageur canoes,” huge boats that I learned were used in the days of the fur trading industry. Fur traders used one of two types of canoes; the Montreal canoe and the slightly smaller north canoe. They were originally used by fur trader crews to ferry men, supplies and pelts to and from trapping sites. The huge boats were capable of hauling upwards of 600 lbs. On this day they hauled a few hundred pounds of kids up and down the river.

As we walked around we noticed lots of oddly-shaped boats on car racks we initially thought were kayaks. They were shrouded in boat covers, a sure sign that whatever was underneath was pricey. The angular boat geometry looked like elongated diamond shape. It turned out they were C1 boats. C1 is short for Canoe: 1 man. They are stripped down versions of a canoe, and the extreme geometry means they can go very fast indeed. We had read there was going to be a canoe race. In my uneducated state I imagined something like a fleet of Old Town canoes lumbering through the water. These boats were Ferraris. I ran into a paddler who was getting ready to race. She was kind enough to show off her boat and explain a little about them. The Michigan Canoe Racing Association was holding two races that day; A C2 (two man) and C1 race. We were there for the start of the C1 race. It felt a lot like a cycling race—lots of skinny, intense-looking people fussing with exotic gear that seems oddly familiar, but is nothing like what you use everyday. Boats lined up at the starting line, and when the start horn sounded, the paddlers took off like the proverbial bat out of hell. The speed impressed me because they use single paddles. No dual oars/blades allowed. They disappeared around the river bend in seconds.

The park where the festival was held had a separate “lagoon” for kids’ activities. My favorite was Canoe War. Canoe War is exactly what you might think. Two teams of kids in canoes trying to sink each other. Lifeguards were on duty and each combatant wore a life vest. The lagoon was chest high on the smallest kids. Each boat was allowed two paddlers and were armed with super soakers and one drywall bucket. First team to sink the other’s boat wins. That was fairly hilarious to watch, especially so the parents who kibitzed from shore. “Get that bucket really full and SINK THEM!” “Show no mercy!” I’m not sure how long the average battle at sea takes, but teams would fling water at each other with great fury, then retreat for a quick bailout to start again. Thankfully most teams lost their battles abruptly when overzealous combatants stood up in the canoe and flipped the boat.

I also learned about some missed opportunities at the Paddle Day. We had left our boats at home thinking there wouldn’t be nearby paddling suitable for our boats and our ability. Turns out there are very nice paddling trails right there at the park, a chain of islands just off the shipping lanes. We loved Sault Ste. Marie, and the next time we visit we’ll be sure to bring the boats!

One thought on “Michigan UP Miscellanea, Part 1”

Henry demonstrating various ways to lie on a pillow.
“How you doin’?”
Henry gets the royal treatment on a hike.
Henry knows how to be comfy on the road.
Gumbo says “OK Henry, you work the pedals and I’ll do the wheel thingy. we’re outta here!”
Mr. Popular.