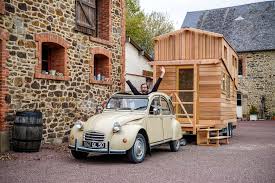 After our harrowing drive to Peoria, we pulled into Wal-Mart and parked behind a well-traveled Holiday Rambler fifth-wheel. The next morning we were puttering around and passed our fellow traveler in the store. We were getting ready to leave when Ben noticed she was working on her rig, so he stopped over to see what was going on. He came back for his toolbox, and a couple minutes later I joined them. They were repairing the emergency braking system on the trailer.

Mia Torres is a carpenter and a travler. She’s crisscrossed the country many times. Raised in California, she lived for a while in NYC, and is presently on the way to Portland OR. She has done everything from framing to stage carpentry. When we met Mia she was on her way to Portland to start a business building–can you guess? Tiny houses. She joked that she was named after Mia Farrow, and the name is where the resemblance stops. A strong, confident woman with a big warm smile. I liked her immediately.

Mia’s company is to be titled Big Little Builders; she’s in the process of building a website. I told her that I expected to see her on an episode of Tiny Homes one of these days. With her braking system in order, we parted ways as we both had places to go. As I write this, she is just ahead of us on the highway. She’s a speedy driver and is quickly disappearing from view.
I love people and learning about them, but I’m a bit of an introvert; I generally don’t make the first approach, and even if I do it takes me a while to warm up.  Ben is a polar opposite. Gregarious and unafraid, he marches right up to people and says howdy; in five minutes they are under his spell. By the time I show up, the ice is broken. He enriches my experience. Here are a few more scenes from the day.