Those of you who are knowledgable nature types will get the punch line long before I finish this story. We’re staying in a campground in a rural area of the Florida panhandle. The campground is on the edge of the Gulf; there are no streetlights in this area and nights are inky black unless the moon is out. Stands of pine trees are on either side of the campsites, It’s common for folks here to walk their dogs through the trees at day or night. The dogs like to snuffle through the leaves and long pine needles that litter the floor.  Most of us do this with a variety of footwear like flip flops or in my case, Crocs. Crocs function both as footwear and shovels, collecting an assortment of stuff as I walk. Every now and then I stop to shake rocks or pine needles out of them.

Most of the other people use flashlights at night. Backpacker that I was, I prefer to wear a headlamp at night; it’s easer to walk the dogs that way, you can focus on holding leashes and bags and whatnot.  I have a habit of using the dimmest setting and angling my light down so that I don’t blind people when I I look at them (unlike Ben, who fries my retinas. Every time.) I have a new headlamp that’s brighter, and with the deep darkness of the night among the pines, I had it on its brightest setting and aimed straight out. I noticed something unusual on the first night–here and there there were little sparkles in the leaves. I figured it was glass litter from the fish camps. The first few nights here were quite cool. The last couple days were warmer and sunny. Last night I went out with the dogs and was tromping through the pines when I realized the ground looked like someone had thrown fistfuls of glitter everywhere among the leaves. There was one particularly shiny spot ahead of me, so I decided to investigate it. I bent down and found myself staring into the face of a huge wolf spider. I came to the realization that I was standing in the midst of a wolf spider jamboree. I straightened up and looked at the glittering hordes around my feet, representing thousands of sets of eight beady eyes. I became very aware of sand, pebbles and whatever else my Crocs might have scooped up pressing against my feet. Two seconds before it was just the usual sand in my shoes, now it felt like they were full of spiders! A full blown wave of arachnophobia swamped me and I hustled the dog and me out of there as fast as I could. I couldn’t get my shoes off fast enough. I’m generally not a squeamish person, but even as I write this I’m getting the willies again.

Of course I had to google this, and it turns out sparkly spider eyes is a well-known phenomenon. The trick to see spiders looking at you is to use a very bright headlamp or hold a flashlight at eye level. Do this in your backyard at night to see them or if you’re really brave wander around your basement, See any green glitter? That’s spidey watching you. Perhaps there were more than usual out tonight because of the weather, but it was eerie. It reminded me of phosphorescence on water. All these years I’ve walked around with a headlamp and never really paid attention until now. I think it was a combination of the number of spiders and that this time I had a really bright light aimed at the correct angle. The really funny thing is that Ben has been telling me he has seen sparkles in the grass forever, and I’ve always blown him off.  In my exhaustive research (one hit) for this story I also learned that wolf spider is a generic term for ground spiders. In Florida there are a bazillion kinds of spiders. Eight times a bazillion is a lot of little glittery wolf-ey eyeballs. I am so gonna have fun with the other nighttime dog walkers tomorrow.

I’ll still walk the dogs at night, but you can bet I’ll wear socks and hiking boots when I do it. I wish I’d brought my gaiters with me too. Maybe I’ll get some dog booties while I’m at it. 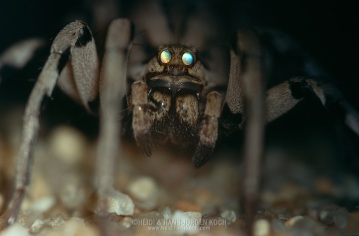 3 thoughts on “A Croc full of Heebie-Jeebies!”