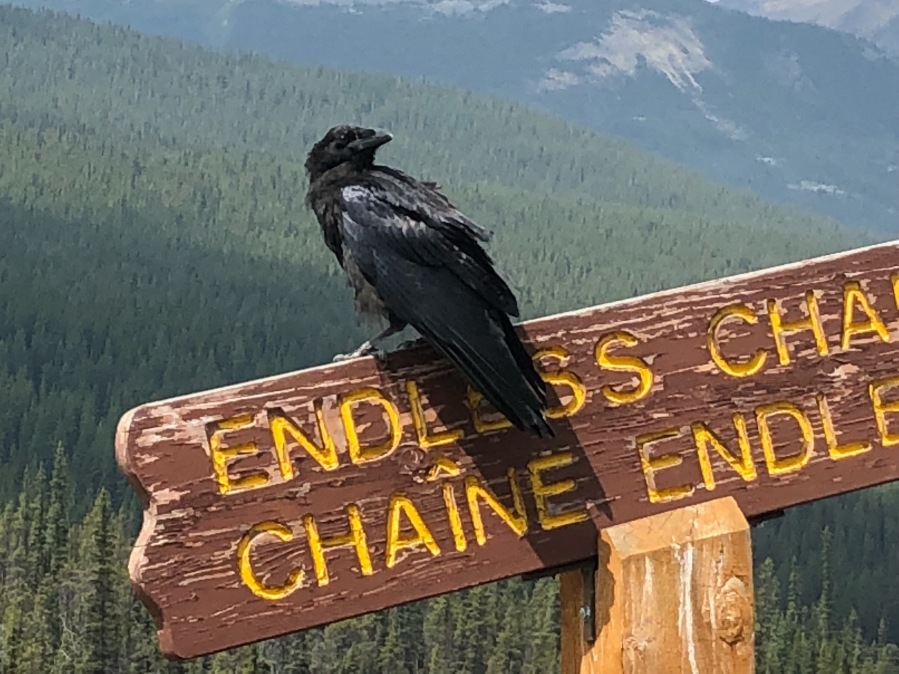 The first leg of what I’m now calling “Parkapalooza 2018” Started in Hinton, Alberta at Jasper National Park. Like most planners, I read lots of guidebooks and checked out the usual travel blogs and websites. I even talked to a few human beings about where to go and what to do. Jasper National Park is at the Northern Terminus of the Icefield Parkway in the Canadian Rockies. It encompasses all manner of habitats and features some of the largest remaining glaciers in North America. I wrote about our favorite hike in Jasper, so let me tell you about our favorite drive.

Jasper and Banff are connected by the Icefield Parkway, 145 miles of stunning mountains, icefields and glaciers along the Continental Divide. We drove the parkway in both directions; north to south with the motorhome when we moved from Jasper to Banff, and then from Banff to tour the Athabasca Glacier.

When we headed south, we thought there wouldn’t be much chance to stop and take in the scenery as we were close to 50 feet long with the rig and our tow vehicle. We were pleasantly surprised to be wrong. There were generous turn outs all along the parkway which was a good thing as there were RVs of all shapes and sizes parked everywhere. What should have been a two-hour drive turned into four-hours because we stopped so many times. Our Red Dog got to swim in a glacial river while Henry fished for nonexistent hermit crabs on the bank. Each turn of the road delivered jaw-dropping scenery. Mountain ranges were thoughtfully labeled by the Canadian park

service with many displays that explained what you were looking at and identified important features of the area. Larger stops featured hiking trails with areas to park and leave your car or rig. Unlike the US, leashed dogs are allowed on trails so we were all able to take short hikes here and there.

After we got to our campsitesite in Banff, we definitely wanted to return to the Icefield Parkway. We decided to take a tour of the Athabasca Glacier. There are all kinds of glacier tours, from a short walk to the toe of the glacier, hiking and climbing on the icefields to glaciers or riding on an enormous ice bus to the glacier for a stroll. Guess which one the Car Guy chose? Right. Enormous bus it was. The whole trip involved an hour and a half drive each way along with a four-hour tour. Tickets had to be purchased in advance, and you selected a tour departure time. It made sense for us to get there early to get a good parking spot and have time to eat lunch before the tour, so we set out spankin’ early for the Icefield Center.

The Icefield Center is located on the Jasper National Park end of the Parkway. It’s an enormous complex with two restaurants, the usual gift shop and a concourse that looks like airline departure gates. We and hundreds of others milled around looking for our departure gates. From the Center it was possible to see people moving about on the distant glacier; they looked like tiny LEGO people waddling around on the ice. We checked in and found

our gate. As we stood in line, I checked out my fellow travelers. We had been duly warned that it would be very cold on the surface of the glacier, and that the ice would be slippery (ya think?). Apparently our fellow passengers hadn’t gotten that memo. I saw all sorts of people wearing interesting combinations of footwear and garments they deemed suitable for glacier walking. In my mind if you are traveling to a place known for rugged territory and you expect to walk around you might want to bring along some sturdy shoes. We amused ourselves with people watching when they announced our Brewster tour bus was ready to transport us across the road and up to the Brewster Terra Buses that would transport us to the Athabasca Glacier.

The Brewster family operation originated tours for Banff and Jasper National Parks in the the days when tours were given on pack horses or horse drawn wagons. These days the buses called Terra Buses have special tires that minimize the damage to the glacier’s surface.

Our driver was a young woman who was working through the summer. As we bumped along the path to the glacier, she entertained us with her driving qualifications “Yes, I am old enough to drive as long as I use my booster seat,” glacier facts “Scientists predict that the Athabasca Glacier will be gone in approximately 75 years,” and so on. When we approached a harrowingly steep grade, she told us to check for our seatbelts located under the front of our seats. As we all groped around, she then let us know that the bus had no seat belts. Ba-da-bump! We arrived at the glacier’s surface, and were given a half an hour to wander around in a restricted area. The glacier is checked daily to see where it is safe for people to walk, as the ice is a living thing. We stepped off the bus onto an ancient hunk of ice.

Friends, it was indeed cold and very windy. The whole landscape was wintry, as the Athabasca Glacier is surrounded by other glaciers and ice fields. The sound of running water was everywhere, the glacier melting away under our feet. I got an object lesson about the ice when I stepped out of the bus and my right foot broke through the crust and dropped up to my shin into a hole of icy water. “Sorry about that, we’ll have to flag that area,” said a the

guide. So   much for waterproof boots. The ice varied in color from impossibly blue (old) to white, and gray (new). The gray was the result of rock dust from the force of ice grinding the rock away. The rock dust is what gives glacial rivers like the Athabasca River it’s aquamarine color. It was sobering to look at the lateral moraine deposits that marked the glacier’s retreat. We were told that the glacier originally reached the steps of the Icefield Center, across what is now the Parkway. Eventually the Athabasca Glacier will be declassified to a snowfield, and perhaps even the mighty Athabasca River will cease to flow.

We had fun drinking the water and licking the ice (they told us it was OK) and doing our own version of the LEGO people waddle on the ice. One woman never left our bus. Ben encouraged her to try. “It’s safe, and you’ll never have an  opportunity to do it again,” he said. She’d had joint replacement surgery and was afraid to fall. Others were concerned with the cold, but most of the flip-flop wearing folks were slide-walking bravely across the ice, wincing when they encountered icy puddles. Then it was time to go. We hopped on the bus for the last part of our tour; a walk on the Glacier Skywalk.

The Glacier Skywalk is a walkway just shy of a mile long that leads to a glass platform suspended over a 918-foot drop. From there you view the glacier and the mountains. It was beautiful to be sure, and though I’m a little hesitant about heights it wasn’t difficult, because it was jammed with people posing here and there on the glass floor for selfies. The mass of humanity took away from the suspended in air feeling you were supposed to

get. Still it was really amazing. Brewster Buses were lined up at the walkway to take us back to the Icefield Center. We found our car and headed back to our RV in Banff. We agreed that Ben would drive in the morning and I would drive home. While I was driving, Ben snoozed away, giving me time to think about the day.

Even though the companies are doing their best to preserve the glacier, each step and each vehicle exacts a toll on the ice. Eons ago the whole valley was filled with ice, now the mighty glaciers are diminished to patches a few miles wide and thick. Still, the armies of tourists are not the main threat to glaciers. While we

were in the area temperatures soared close to 100 degrees; unheard of in the alpine and sub-alpine mountain areas. Where there were hundreds of glaciers, now the numbers are in double digits. One of the stories our guide told was about the relatively new Athabasca Lake that sits at the bottom of the glacier, a result of increased melting. We were told that Brewster guides unfortunate enough to have a birthday during the guiding season have to jump in the icy water as an initiation. That seemed unfair to me; guides who had birthdays off-season got a break strictly as an accident of birth. There will be a few more generations of hapless guides making that fateful jump; Ben and I will be long gone by the time the ice retreats for the last time. I hope the ice and blue, blue waters find a way to endure.