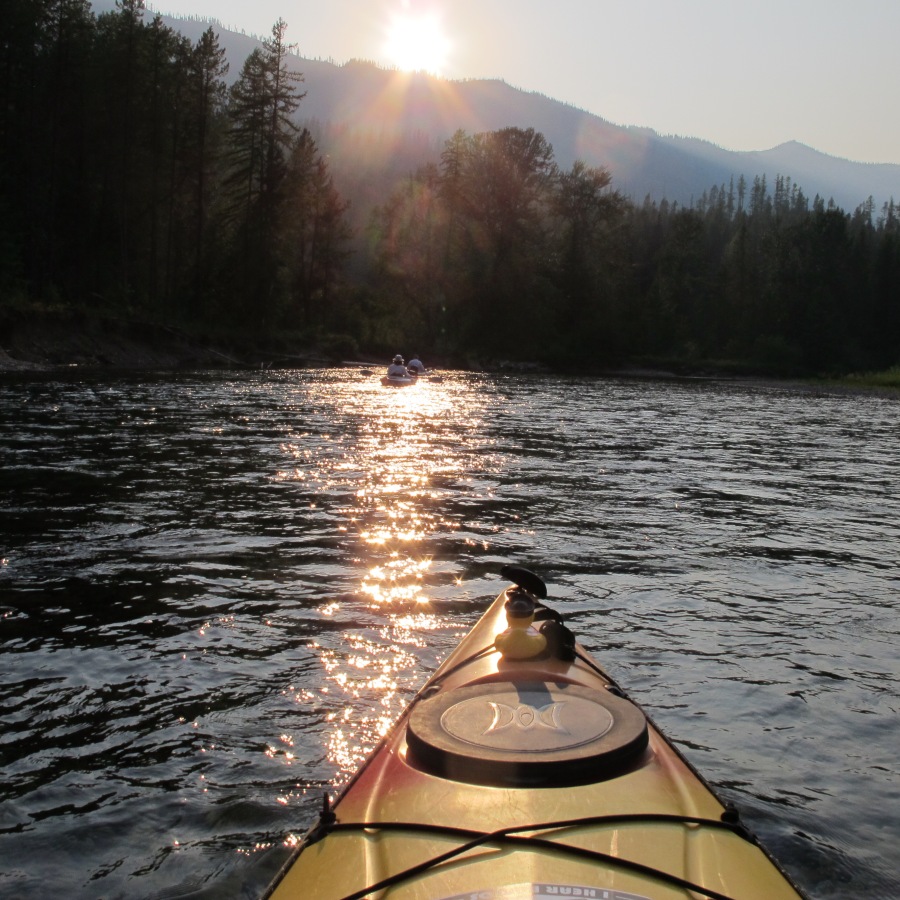 The haze of smoke shrouded the mountains around Glacier National Park all day so we decided to go paddling on McDonald Lake rather than hike. Late that afternoon we loaded our boats and headed for the boat ramp. Timing a visit in any of the parks is essential, as crowds are largest between 10 – 4. Go early morning or late afternoon and you’re likely to find a more peaceful experience. We were unloading our boats on the beach when our boat racks caught the attention of another paddler. He and his wife started asking questions about the saddles; where we got them, was it easy to load the boats, etc. They live in a town close to Glacier, and were also boating that evening. He introduced himself as Gene and wife Jeannie. They said they were planning to paddle McDonald Creek just off of the lake and would we like to join them on a paddle. Gene said he would be able to help us with portage. How can you turn down an offer like that?

McDonald Lake is a beautiful area, but on this evening the smoke obscured the mountains that ringed the lake. Gene and Jeanie explained that McDonald Creek was a paddle of a few miles that connects to the Flathead River. That sounded like a great way to while away the last few hours before sunset. We slid our boats into the lake and headed past the lodge and cabins to the mouth of the creek. Private homes still dot the lake here and there; they are owned by families who purchased land before the area was declared a national park. Families may keep and hand down the property for as long as they wish, but if it is to be sold outside of the family the park service buys the land. We drifted by the homes, some of which were very rustic and others quite swanky. Then we made the cut off to the creek.

We drifted through an open valley in water so clear the boats looked as if they were suspended in air over the river bed. Swifts darted here and there. We rounded a corner and heard a resounding smack and splash when a disapproving beaver registered it’s displeasure at our rude intrusion. I was so busy looking at the beaver and trying to get a photo that I managed to get my boat hung up on a strainer (for you non-boaters that’s tree branches in the water) an embarrassing rookie move in front of our new acquaintances. Fortunately I got off the strainer OK without going swimming or losing my phone. It was a beautiful evening to be on the river.

There is always something going on in the national parks. Close to where we put out, there was a group of young people stringing nets at the mouth of a small creek. I paddled over to them and learned that they were studying bats. It was well before sunset, and they were taking off to get a bite to eat before settling in for the night to monitor the nets. They told me they’d be there until about 2AM. We put out at a bridge, and Gene took off to retrieve his truck. While Ben and I waited on the bank, I noticed movement in the river—it was a beaver! I finally got my picture from dry land after nearly flipping my boat. Gene returned and after we got our boats loaded, we headed out to dinner together.

Gene was an interesting fellow, packed with a lifetime of stories and delighted to have a new audience. Before he retired he was sheriff of Jackson Hole and a fly fishing guide—a very good and sought out fishing guide. He’s guided actors and presidents and other heads of state over the years, earning he and Jeannie a front row seat at a presidential inauguration. It was his favorite story. They were seated just behind the Justices of the Supreme Court. A man next to him sized them up and said “I raised 13 million dollars for the party, what did you do to get these seats?” Gene replied, “I’m the Vice-President’s fishing buddy.” It gave him great satisfaction to see the man’s expression.

A day or two later, they called us and invited us to their home. They had a comfortable home perched on the edge of a river so Gene was steps away from casting for fish. On the other side of the house there was a beautiful view of the mountains. We were joined by their son and their two dogs. It was a great evening, of great food and conversation. When Gene and Jeannie retired, they wanted to live somewhere where they could fish, boat, bike and hike, and living in the midst of Glacier National Park and the Flathead River area seemed like the best solution. Jeannie said that they had difficulty meeting people their age who were interested in doing things outdoors. I agreed with her. The older you get the harder it is to find people who are willing or able to get outside. Someday age and infirmity will sideline me and Ben as well–but not this year. She and I allowed as it was too bad we didn’t live in the same state. We said our goodbyes and headed back to our campsite.

It’s serendipitous experiences like this that makes all the little hassles that go with traveling worthwhile. Flat tires, gnarly roads, sick dogs and all manner of irritations are vastly outweighed by unexpected opportunities. A question about kayak racks led to an invitation to an area we had no idea existed, and an authentic acquaintance.

The day after our dinner together we left Glacier. Before we got very far we pulled off the side of the road to do a map consultation. That is code for we hadn’t gotten our act together earlier and disagreed on the route. We were looking at the map when Ben’s phone rang. It was Gene. They had passed the rig on the side of the road and recognized our gear-laden Subaru. They thought we might be having trouble and called to see if we were OK. We assured them we were, and thanked them for their kind fellowship that was the highlight of our visit to the park.

One thought on “Serendipity Strikes”