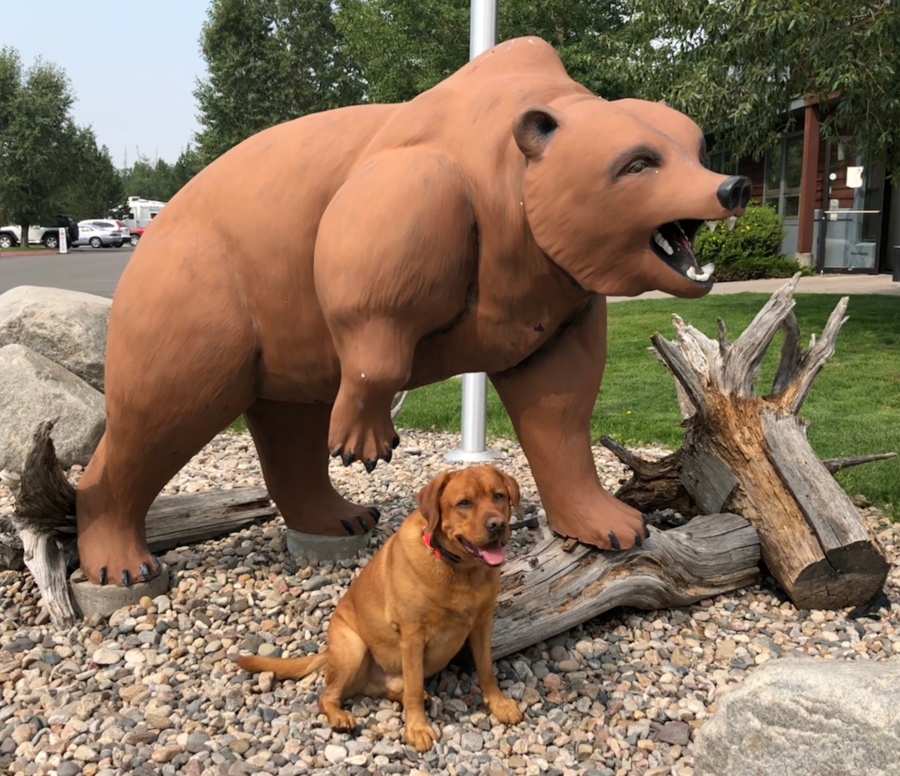 This summer we visited five national parks; Jasper and Banff in Canada and in the U.S. Glacier, Yellowstone and the Grand Tetons. We visited at the height of tourist season, which means we experienced the parks along with about a bazillion of our new best friends. Whether we were in Canada or the U.S., ogling wildlife was the most popular activity.

Spotting critters in a national park is very easy as long as you follow one of two highly successful methods that ensure successful wildlife viewing. The first method involves hiking to an area wildlife are known to visit either early morning or towards dusk, sit quietly with binoculars, and wait for your patience to be rewarded. The second way is to drive along the parkway and look for knots of cars off on the side of the road, their owners waving smartphones or cameras with ginormous telephoto lenses in the air. The next step is to get out of your car, run to see what animal is there, run back to your car and get your phone/camera and then run back to get a picture. The latter method seems to be most popular with the largest percentage of people who come to the park.

Everyone wants to see animals of course and the holy grail of animals seems to be the bear. They may look all cute and fuzzy but every animal from a squirrel to a lion is capable of inflicting harm. Park rangers in both countries are very clear about interacting with wildlife, particularly as to what constitutes a safe viewing distance. The general rule is to stay at least 25 yards from most wildlife and 100 yards from bears and other predator species. These rules are generally ignored. As much as people want to see bears up close and personal they also seem to not want to be mauled by one. As a result of these competing needs, the most popular item for sale in all the parks, gift stores and grocery shops is bear spray, a canister capable of shooting pepper spray up to 30 feet. People carried bear spray canisters on their belts like open-carry gunslingers which was a little scary. When we boarded public transportation the driver routinely reminded passengers to properly stow bear spray. I wasn’t sure how many bears we would see in the pizza restaurant in downtown Banff, but at least three-quarters of the patrons were carrying bear spray on their belts. Interestingly, pepper spray devices for humans in Canada is considered a weapon, but apparently bear spray is OK. We too bought bear spray, after I talked to the park ranger. She told me we probably wouldn’t run into bears in on the trails, but that habituated bears were a problem in the campgrounds, and weren’t scared off by the usual anti-bear tactics. So we bought the spray. We also watched the helpful Parks Canada How to Use Bear Spray video. Thus prepared, of course we never encountered a bear, and we have a $44.00 souvenir cannister.

I don’t think of myself as a wildlife expert, but I do know the difference between bears and people walking dogs. Not everyone else seems to know these differences. Ryder and I were hiking through the campgrounds (in US national parks dogs are not allowed in areas other than campgrounds and within 100 feet of the road) one morning. It was mid week and most of the sites in the tent area were empty. I had him on leash and we were doing some exploring. We rounded a curve to come face to face with two guys who had their bear spray canisters pointed in our faces. Fortunately they were more of the “don’t shoot until you see the whites of their eyes” kind of guys rather than the “shoot first ask questions later” type. I’m glad we didn’t get a lesson on what do do when sprayed with bear spray that day. After that experience, I walked all our dogs wearing their hunters bells.  You don’t want to get the stuff on you; it’s difficult to get off.

Our first encounter with wildlife happened as we were traveling south in our motorhome from Jasper to Banffon a narrow two-lane highway. We could see the traffic jam in the distance; cars were pulled off on both sides of the road and people were scuttling back and forth. We couldn’t see what everyone was gawking at, but a pickup truck towing a camper pulled off on the road in front of us. Actually, the driver pulled the truck off the road, but the camper stuck out several feet into the lane in front of us. There was a solid line of traffic inching north, and the trailer now prevented us from proceeding south, along with everyone behind us. The driver and passenger of the truck got out and hustled across the street in front of us. As all this was going on I was hanging out the window and finally got a glimpse of what the fuss was all about. A black bear was munching on blueberries in the brush, and a tremendous crowd was lined on the berm to watch. Most of the people were less than 100 feet from the bear (remember the 100 yard thing from the earlier paragraph?). Ben, sitting in the driver’s seat couldn’t see the pandemonium just under my window. He was busy having a “ dialogue” with the truck driver, along the lines of “get that thing off the road you’re blocking through traffic!” The camper driver replied with some universal sign language, and Ben did what every red-blooded dude does in these situations: He laid on the horn. The difference is of course, a motorhome has air horns and they are LOUD. WHHHHOOOOOONNNK! Every living being jumped about two feet.

I almost dropped my camera on a lady’s head. The bear reared up to see what the heck was going on.  People scattered like Godzilla was chasing them, and in seconds the crowd dispersed. Fortunately for everyone, the bear was more interested in berries than other goings-on and just went back to its business. While people scurried to their cars. Ben alternately got a lot of dirty looks from the bear watchers and grateful thumbs-up from fellow drivers trapped in the traffic jam.

Bison look like giant cows with a weird show dog haircut, and show up in random places. We’d be walking or driving somewhere, and there would be a bison standing near or on the road. One of the more sobering signs at the Yellowstone park entrance was a tally of the bison killed on the road.

One day a small group were ambling slowly along the road with a mile of cars piled up behind them. The bison did stay on their side of the yellow line, which I thought was most courteous. I can’t say the same for most of the human drivers we encountered.

Even my Red Dog had his brushes with wildlife. One evening we were walking on a trail near the campground. I let him off his lead so he could noodle around a bit. He was nosing through some bushes, and I turned to look at the sunset and saw a herd of elk come up through the campsites towards us. Elk can be incredibly dangerous, especially the females when they have calves. I saw people clearly under the spell of the Bambi Effect wander so close to elk that I feared for their safety. I was grateful that Ryder obeyed my silent “come here” signal. I snapped on his leash and softly said “good boy.” The elk stopped dead in their tracks and stared at us. Ryder didn’t move a muscle, and the elk moved on.

Another knot of cars helped us find a couple moose, who were wandering through a burnt up patch of forest. I had my binoculars and my iPhone. I snapped a picture of the moose, but only I know it’s a moose; the photo is so grainy it looks more like one of those phony Yeti photos. Trust me, it’s a moose. Someday I’ll get a big girl camera. Elk are everywhere. The females look like exceptionally large deer, but the males are impressive with their huge antlers.

Little critters are everywhere. Our Banff campground had a huge population of ground squirrels. The stretches of grass between campsites were riddled with holes. The squirrels would announce their presence with a loud “chirp” before diving into their burrows. Ryder stuck his head in every hole he saw, but his efforts were in vain, and he was roundly scolded by the squirrels. On a hike to Avalanche Lake in Glacier, we sat next to a young couple on a log. A chipmunk shot out of the log between the young woman’s feet. She screamed bloody murder and ran for her life. For the rest of her lunch break she refused to sit on any surface, and munched her granola bar standing at tight attention. Nature is truly terrifying.

We saw lots of raptors on the wing, all manner of eagles and hawks. We got closest to them at the Buffalo Bill Center of the West museum in Cody Wyoming. They had a raptor exhibit with birds that were captive because of injury. Ravens were our constant companions; they like hanging around us messy people.

For all the wildlife we saw, it’s a tiny percentage of the species that live in the parks—for now. Some are in such small numbers that getting a glimpse is only possible by spending time in the deep backcountry. Others are only viewable in small preserve areas. Slowly but surely critical habitat is being lost in the parks due to fire, disease and invasive species. I’m grateful we had the opportunity to be in the parks. I surely hope it continues to be a vibrant experience for our children and their children.