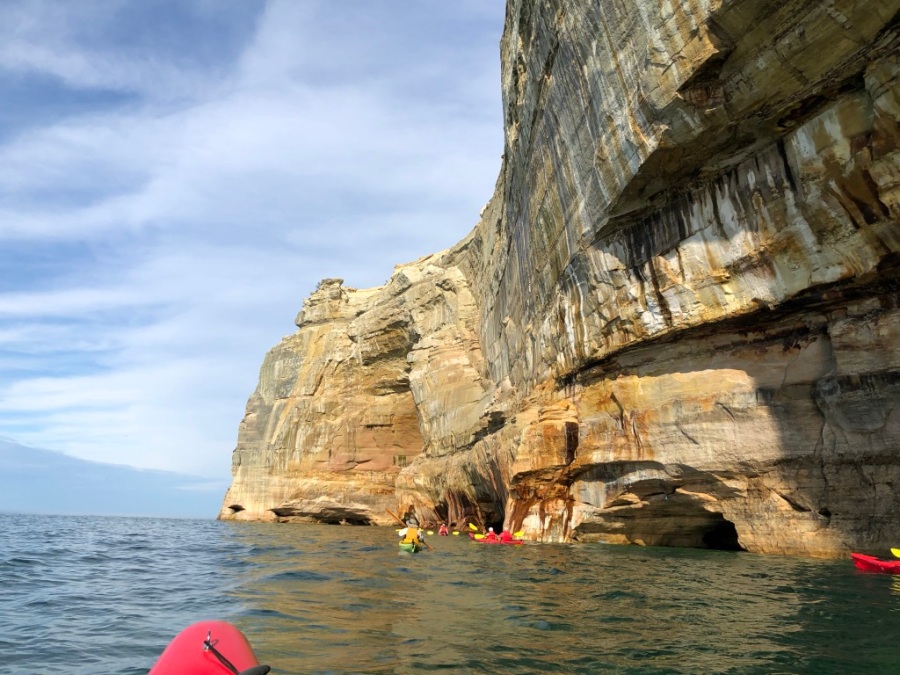 Humans have paltry imaginations when it comes to the size of natural wonders. We underestimate what is required in terms of time, distance and effort to experience such places. We look at the dots and splotches on maps that indicate where such things are located, ogle photos from slick publications and imagine ourselves in the same spot. I’d imagined what Pictured Rocks National Lakeshore might be like for years, so this summer we headed off to Michigan to see the park.

Pictured Rocks is situated along 42 spectacular miles of Lake Superior, 15 miles of which are the storied painted cliffs that give the park its name. The Park service website helpfully explains that 42 miles equates to 5 Manhattan Islands. There are also 100 miles of hiking trails in the park if water isn’t enough for your activity level. I have dreamed about paddling the cliffs for years and scrolled through an endless number of blogs describing idyllic views—and near disasters. I have learned through my personal near disasters to carefully scope out destinations and know your limits and the capacity of your equipment. Lake Superior is not to be toyed with in one’s dinky recreational kayak. Lack of proper equipment coupled with putting in at the wrong place will ensure you’ll be exhausted or in danger long before you reach any scenery. We agreed going with an outfitter made the most sense for us.

I chose the Pictured Rocks Kayaking Company based on advice from the local kayak shop. I looked at their website and my heart sank. All their boats were tandem sea kayaks. The sea kayak part was fine, it’s the right kind of boat, but–tandem paddling? Dear readers, if you’ve ever done tandem anything you know that not all paddling duos are created equally. Ben and I had tried tandem paddling in Canada some years ago and while we did get where we were going, it was not smooth sailing. Let’s just say Ben and I have different ideas about kayak technique, speed, distance, direction, who gets to steer—you get the picture. After Canada we always used separate boats. I called the company to beg for special dispensation. No luck. Tandem or nothing. My desire to paddle the cliffs turned out to be greater than my need to be the captain of my own ship. I gave in and signed up, tandem kayak and all.

We showed up on the appointed day and met our tour guide Linda, a retired school principal. Like all principals she had a good outside voice and a no-nonsense approach to managing our group. Linda and her co-leaders lined us up and gave us a quick safety lesson. Outfitter lessons don’t vary much among companies, they are, in order; Wear Your Life Jacket, Hold Your Paddle Right Side Up (label facing you and not upside down), Stay With Your Guide, Don’t Tip Your Boat. On this trip we wore spray skirts, so an added lesson was “Your Butt Will Still Get Wet Even Though You Have A Spray Skirt, So Don’t Gripe About It.” Gear was handed out. Each of us got a paddle and the aforementioned spray skirt, and a PFD (AKA life jacket)—except for Ben and me. We had brought our own PFDs which branded us as Experienced Boaters in the eyes of our fellow paddlers. Having my own PFD is more a matter of personal squeamishness than an indicator of skill. I never liked communal clothing. Bowling shoes, helmets, boots, wetsuits and the like—eww, no thanks.  A woman in our party asked how close we planned to be to the cliffs. She had seen the You Tube drone footage of the rock face that sheared off perilously close to a group of kayakers a few weeks earlier and was concerned about the possibility of another such event. Linda reassured her, saying: “This is nature and rocks fall all the time. If you’re very concerned, you needn’t paddle close to the cliffs, though that is where it is most beautiful. Everyone ready to go?” She started to lead us away, then turned, fixed her principal’s eye on a few people and said “you don’t need to wear your spray skirts on the cruise boat.” They blushed and wriggled out of their skirts. We, being Experienced Paddlers, were among those carrying our skirts, and reveled in escaping the principal’s scrutiny. Linda was a force not to be toyed with. Duly prepared and disciplined, we headed for the dock, following Linda to the dock skirtless, clutching our gear.

The trip starts with an hour-long boat ride to the stretch of Lake Superior with the most popular cliff views. Kayaks were loaded on the upper deck while we passengers rode on the lower deck. Linda walked the length of the cabin before we took off to divide us into groups 1 and 2. I was a little disappointed; given her background I thought she might group us into Redbirds and Bluebirds. Regardless of our group assignments our fellow passengers fell into one of two camps; those who remained below and played on their phones and those who crammed onto the back deck to take in the view and get photos. We were in the latter group. As we powered along Lake Superior I got a sense of how immense the lake is. Water stretched to the horizon ahead in a stunning blue expanse.

We reached the put-in point. The deck hands lowered each boat off the upper rails into a floating chute on the back of the boat. We hopped in, adjusted our spray skirts and eased into the water, me in the front, Ben in the back. In a few short minutes all of us were paddling after our guides towards the cliffs. The cruise boat followed us along at a respectful distance ever ready to be summoned in the case of a dumped boat or an exhausted paddler.

Friends, let me tell you that it was an awesome experience. Lake Superior was kind that afternoon with overcast skies giving way to deep blue as we paddled along. The water rose and fell gently, larger waves coming from the big tour boats that carried people who didn’t want to get as up close and personal with the cliffs as we were. Much to my surprise and relief, Ben and I seemed to have overcome our differences and managed to paddle with amazing synchronicity. I guess that’s what happens after 8 years of marriage.

Linda was a great tour guide, hampered only by the need to shout over the noise of wind and water. She described rock formations and filled us in on the history of the area. There were many piles of massive stones at intervals along the base of the cliffs, a testimony to the power wind and water have over mere sandstone. I did notice our nervous paddler kept her distance; if she drifted too far out, Linda would call her back to the fold. Linda used a wooden paddle that is called a Greenland paddle. It’s fashioned after the traditional Inuit style, a bit shorter than a standard paddle with narrow blades. I admired it and she offered it to me to try. I’d seen them in kayak shops but had never used one. As I sliced through the water I was amazed at the power of the paddle and how silently the blades cut through the water. After a few minutes I was hooked. The paddles are not cheap. They are handmade and good one costs around 400 bucks. I handed it back to her and she confessed she owned about four of them. Kayak guiding must be a good job.

We were in a particularly clear bright stretch of water when Linda summoned us to “raft up,” meaning we huddled into a solid pod of boats. She had instructions. “We’re going to fan out and work a grid search to find a shipwreck.” We did as we were told, slowly traversing the water together. Suddenly a guy called out. We all hustled over and sure enough, lying on the sandy bottom were the bones of an old ship. The hull ribs were visible, and the mast trailed perpendicular to the hull. I asked how deep the wreck was, and Linda guessed less than 100 feet. The water magnified the wreck and made it look like I could lean over and touch it. I didn’t attempt it because that would violate the rule of Don’t Tip Your Boat. It was really cool and eerie looking. Linda told us the history of the wreck that sank some time in the 1800s, but that’s all I remember. I’m a blogger, not a journalist. You’ll have to take your own trip and find it yourself if you’re curious.

Our time was up, and we headed back to the mothership that had been patiently following us. We guided our boat into the chute, hopped out and that was it. Once the boats were all loaded, we headed back to the dock.  About a half hour into the return trip, we were alerted that we were passing by the area of the recent rockfall. I snapped a photo, but it was most un-dramatic. It looked like every other rockfall piled at the base of the cliffs. We returned our gear, thanked Linda for her service and headed our separate ways.

I have a bucket list of sorts but it’s very open-ended and after each trip I find new things I want to experience. Sometimes you don’t realize something is on your bucket list until you’re in the middle of an experience and you have the sense that the moment you are in will stay with you forever. For me this trip was both something I longed to do, and turned out to be more than I expected.

Enjoy this slide show. It’s not extensive, but we decided to live in the moment rather than capture every sight.